It is fitting that Houle is recognized with the 2017 Integrator of the Year award, sponsored by Anixter Canada, for a project that required them to work on two different sites simultaneously. 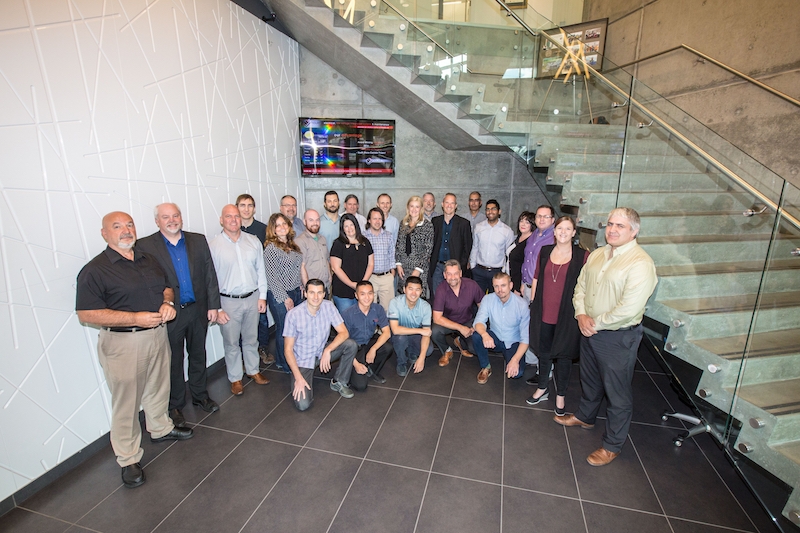 Houle is the first two-time winner of the award, which is given out annually to an integrator that has demonstrated ingenuity, excellence and sheer hard work.

The winning project for 2017 is the North Island Hospitals Project (NIHP) for the Vancouver Island Health Authority (VIHA). Last year, Houle received the Integrator of the Year award for a project for the Port of Vancouver. If anything, NIHP is even more complex, most obviously because it involves two separate yet connected sites. NIHP comprises two new hospitals: Comox Valley Hospital and Campbell River Hospital, which were built to benefit those communities as well as others close by. About 40 minutes apart, they operate independently on some levels, but share common systems, some of which are maintained centrally in Victoria, B.C.

The project is collectively a P3 (public-private partnership). Houle is part of a larger P3 team that includes the general contractor, Graham Construction & Engineering, as well as the project engineer and design consultant Stantec, and the facilities maintenance partner Honeywell. Houle was selected as the electrical contractor for Comox (the Campbell River electrical work was contracted out to another company), and was also selected as the systems integrator for both sites.

The hospitals were built in tandem, starting with construction in 2015. Both are now completed with Campbell River opening on Sept. 10 and Comox scheduled for Oct. 1, based on estimates that were available at press time. Comox is a 153-bed facility comprising 428,700 sq. ft. whereas Campbell River has a capacity of 95 beds for a total of 348,000 sq. ft. — the major difference is that Comox, the larger of the two, has a mental health facility on-site.

The complexity of a single site incorporating this much equipment might seem somewhat daunting, but Houle had to manage two. Clearly, careful co-ordination was required not only between both sites, but also between the P3 partners involved in the build, including the project owner VIHA. This was accomplished through a variety of means. Houle and its partners collaborated every step of the way with VIHA’s Architectural Review Board (ARB), a committee of 30-plus people who reviewed design documents for interoperability as well as privacy and other necessary compliance measures. In addition to working with partners like the general contractor Graham, and the design consultant Stantec, Houle divided its own work into seven co-ordinated teams, each with a separate responsibility. To simplify matters somewhat, Houle appointed a project lead to each site. One could warn or encourage the other, based on their point of progress at their site, helping to reduce the potential for mistakes as well as keeping the project on track and on time.

“If one guy discovered an issue, he made sure the other guy knew about it right away so they didn’t replicated the issue again,” explains Levis Veilleux, Houle’s integration architect.

For Veilleux, the North Island Hospital Project represents more than a challenging install. It required Houle to be innovative, configuring and installing systems that had practically never been used before. The VIHA’s ARB requirements were stringent, and they reviewed every system design meticulously before it could be installed, requiring Houle to essentially “design it before we even designed it,” says Veilleux.

“Typically when we’ve done hospitals, and I’ve done them across the country, often you’ll see things where the owners will specify things like, ‘the system shall be capable of this or that,’ but they never, ever deploy that. These two hospitals were unique in the sense that, they never used the word ‘capable of,’ they made us do everything. So, literally the system is doing things that no other hospital [can],” he says.

Probably the best example of this is the RTLS system from Sonitor, which uses a combination of ultrasonic technology and Wi-Fi to accurately locate staff. It’s also tied into the asset tracking system, patient wandering system and infant protection system.

“Ultrasonic, because it’s soundwaves, the signals cannot penetrate through walls or solid objects. The system is able to give room-level accuracy of locating tags,” says Veilleux. “Whenever a tag walks into a room, it picks up a new beacon signature. If the tag is a staff tag, and they hit their panic button, that tag will transmit the panic alarm as well as the location of the last room that it was signed in to.”

The RTLS is also tied into the access control system, essentially creating smarter doors. For instance, in the case of a Code Blue alert, activated on the nurse call system, a door will automatically open as a crash cart approaches it.

Because the Sonitor system is so new, Houle worked closely with the manufacturer. There are 400 beacons, or location transmitters, on each hospital site which allow the ultrasonic technology to function. Normally those beacons are battery powered, but Houle worked with a local company to develop a board that would hardwire power to the beacons. Sonitor is now looking at reselling that innovation on a wider basis.

It was Stantec, the design consultant, that brought the Lenel system to the table. Houle originally had a different plan in mind, according to Dean Kaardal, Stantec’s design lead for the project, but Houle was able to get on board and support the change. “Houle helped the owner fix the obsolescence of the existing [access control] solution,” says Kaardal. “It was a big part of the integration strategy, because that obsolescence would have created some problems for us down the road. The owner didn’t have a solution for it; we proposed one and then Houle jumped on board and really helped the owner try to wrestle it to the ground and get a solution that’s now working — not just on our two sites, but on the entire Vancouver Island Health Authority. They really stepped up.”

Houle also worked closely with Lenel’s own professional engineering services to ensure that the technology was deployed smoothly (in addition to from Lenel equipment installed on-site, Lenel servers were also installed in Victoria, where they will manage all of VIHA’s hospitals).

A methodology that allowed Houle to stay ahead of the curve across the entire project was its reliance on prefabrication. The company, which used prefab to good effect in its previous winning project in 2016, relied on it again for this major undertaking. The company’s prefabrication shop was involved in pre-testing, pre-configuration and pre-programming systems, which helped considerably when it came time to installing systems for real.

If Veilleux has his druthers, Houle will use this prepared approach to an even greater extent on future projects. “We tried to mock up all of the systems prior to install, so we can see where we will encounter issues. The biggest issues that we had was some of the products that we went with were bleeding edge.

“The biggest lesson learned [from NIHP] is to do complete mock-ups, not just partial, of all integrated systems.”

Houle was able to complete the NIHP on-time — the scheduled completion date never wavered, even though the project proved to be exceptionally complex, and in some cases, broke new ground for health-care facilities in Canada.