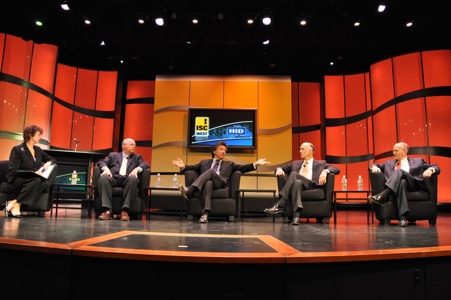 Signs of economic recovery were spotted and heard on the ISC West show floor in Las Vegas as attendees came looking for new tools to grow their businesses and upgrade systems.

ISC West saw a five per cent jump in attendance over last year’s show, with 23,323 people attending the conference and expo this year at the Sands Convention Centre.
The largest percentage of attendance came from end-users representing 28 per cent of attendees, followed by integrators at 20 per cent and the dealer/installer representing 19 per cent. The number of companies participating in this year’s event exceeded 900 and the total square footage was 263,000 square feet.
Speaking at the State of the Industry expert roundtable event the first morning of the show, Richard Chace, CEO and executive director of the Security Industry Association (SIA), said that while the economy is “still on the soft side,” the security industry is “doing very well,” in large part due to government-backed Homeland Security spending in the U.S., but there remains pressure on the residential side and on manufacturers to cut costs and provide training.

“How else can you sell equipment to people when they don’t have the skills to manage the technology?” he said, adding the industry has to find new and creative ways to add managed services and build value into their businesses to improve recurring revenue.

Bill Bozeman, president and CEO of PSA Security Network, an electronic security co-operative based in Colorado, said the biggest challenge is the squeeze on margin.

“When it will end no one knows yet,” he said. “When I started in this business 30 years ago, margins were 50 per cent.”

Lynn Mattice of the Security Executive Council said the “margin squeeze is here to stay and it’s going to get tighter.”

However, Mattice said he feels the industry is poised to do well over the long term.

“We’re very innovative and when we have a problem we find a solution. The real target is to get a handle on Internet security issues. We’re in the security business but how many systems are truly secure given the chips and configuration of the systems?

“I’m afraid we can’t always trust the marketplace. How we procure things that go into security systems has to be looked at,” said Mattice.

“There’s been a fundamental shift in the economy. We have to understand customers better. We are looking at a jobless recovery. If people don’t have money to spend it won’t help — the residential construction market has all but stopped.”

Bonifas noted that technology being used in the industry today will become obsolete much faster.

“We will be more virtual than in the past. The central station will be a place where the best technology happens,” he says.

Checking in with Canada

Canadians were spotted checking out new technology offerings on the show floor and had a more positive outlook in terms of how they plan to add technology to grow their businesses.

Sean Bolli of the City of Calgary was seen on the show floor shopping for card access systems, while others, like Virgil Reed, owner of Saskatoon-based Reed Security, was at the show sourcing new IP Megapixel cameras and intelligent video software.

“Arecont, Axis and Aimetis seem logical,” said Reed. “There was certainly plenty to choose from. The Nuuo hybrid NVR seems like a great off-the-shelf box for smaller applications. I went to ASIS in the fall and during the last six months it seems like the product offerings have exploded,” said Reed, whose client base is about 2,500.

“I’m surprised that some of the analogue camera companies really haven’t done anything to keep up,” he said.

Reed’s company has moved into the business of providing centrally managed digital video surveillance and access control over the Internet, which has helped grow his company.

His top pick for the show was something he saw demonstrated at the Panasonic booth.

“It was HD video conferencing on a 103-inch plasma. It was unbelievable audio and video definition and streaming. Not exactly a security product but maybe a new vertical,” he said.