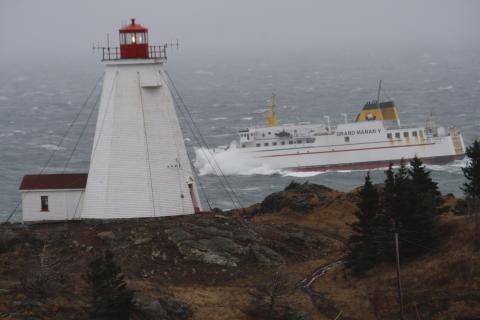 Grand Manan Island may not strike you as a hot bed for crime, but two friends have discovered a growing demand for security services on the picturesque land mass which lies 11 km from the most eastern point of Maine and is served year-round by a 64-car ferry service from Blacks Harbour, New Brunswick.

The island is just 14 km at its widest point and 34 km long with about 2,500 people living year-round on the island. Due to its proximity to the U.S. and appeal for vacationers, Grand Manan’s population swells in the summer to become home to those from Philadelphia, Ottawa and other points on the mainland who have summer homes on the island.

It is those part-time residents, in addition to the year-round island citizens and commercial operators that make up a good portion of the business for Walter Wilson and Larry Parker of Alpha Security Services Inc.
The company, founded four years ago, provides alarm service for burglar, fire, flood, temperature, and 24/7 monitoring, first response, CCTV equipment, remote access, security guards, mobile patrols, property management, private investigation and even process serving of court documents
.
“First response is important to them and we act as key holders for those seasonal people and provide first response should the alarm go off,” says Wilson.
All of Alpha’s accounts are monitored by Safe Harbour Security in Halifax.
A unique mix of commercial business from both the aquaculture industry and local port authority augments the residential side of the business. Alpha recently completed installation of alarms in a salmon hatchery and a salmon processing plant on the island.
Alpha also created alarm systems for a business that has three large enclosed pools that store lobsters. Instead of storing lobsters in outdoor pounds, the preference now is to keep them indoors with purified water processed through a filtration systems.
“It keeps them away from disease and there is also a security interest there,” says Wilson. “Lobster buyers want to store their lobsters inside — this involves water flow and air flow to keep them alive. The company came to us wanting to know if they could alarm their circulation systems to make them aware if the systems shut down for any reason. We adapted one of our conventional burglar alarms to carry those signals. Now, if a pump burns out these people get a call from Safe Harbour saying the flow has stopped on the airline and there’s no power.”
Wilson and Parker also offer a marine alarm that can be installed on board fishing vessels.
“We call it the home port alarm, which will alarm the vessel while tied up at port against burglary, fire, water in the bilge and it phones out over a cellular system to a central monitoring station,” says Wilson.
One of Alpha’s largest accounts is with the Harbour Authority of Grand Manan, which is in the process of putting cameras on the public wharves on the island.
“We give them remote access which allows them to go on at the Harbour Authority office to check cameras and activity history,” says Wilson.
The company also provides CCTV installation and service to local businesses and they do guard services and process serving.
Wilson and Parker started the business four years ago. Wilson spent 15 years with the RCMP, the last 11 with forensics in labs in Vancouver, Ottawa and Sackville, N.B.
Parker worked with Corrections, New Brunswick Department of Public Safety for 20 years and retired 11 years ago.
Both former islanders, Wilson moved back to Grand Manan in 1979 with his wife and two children and has held various jobs over the years including hospital administrator and quality control manager at the local processing plant. He also works in the wholesale food business but the security work takes up about 70 per cent of his time. The duo also employ three casual employees including two licensed security guards and one electronics technician.
Print this page