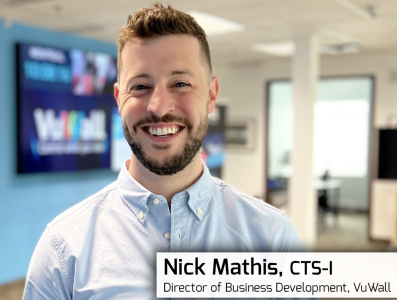 VuWall has appointed Nick Mathis, CTS-I, as director of business development. In his new role, Mathis will focus on building and nurturing relationships with VuWall’s integration partners; resellers; and AV, IT, and security consultants to drive expansion of the company’s customer and partner base in the U.S. market.

“Nick brings a decade of experience to VuWall with a solid background in sales and technical knowledge,” said Maryse Montagne, vice president of sales at VuWall in a statement.

“He’s the ideal candidate to ensure our U.S. expansion strategy excels. I couldn’t be more thrilled to have him join our growing team.”

Mathis graduated with honours from Iowa State University with a bachelor’s degree in aerospace engineering. He earned his AVIXA CTS credential in 2014 followed by his CTS-I in 2017. Prior to joining VuWall, he was a regional sales manager at Matrox. Previously, he worked as a solutions and AV systems engineer at Mechdyne Corporation in the U.S. and Europe for nearly six years.

“I’m excited to join VuWall during such a pivotal time for the company, in a growing industry that I am very passionate about,” said Mathis in a statement.

“I have been collaborating with the VuWall team for a few years and have always been impressed with their innovative solutions and their incredible company culture.”