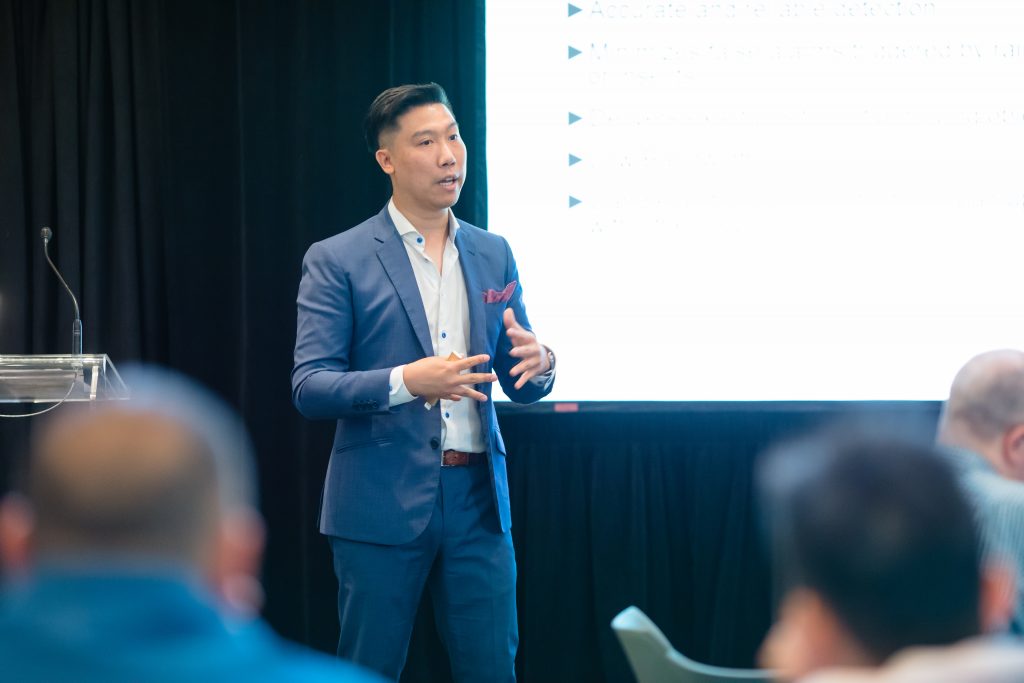 Vipond recently held a customer and partner event to showcase some of the major innovations in security technology and design, often with the added benefit of providing information and intelligence that goes beyond the security department. The event, held at Toronto’s Royal Ontario Museum (see p.7 for more on the ROM’s recent security upgrade), included presentations and demonstrations from Axis Communications, AI solutions firm Anyvision and Genetec. It was co-hosted by Vipond’s own integration division Habtech.

According to Axis, the solution is less likely to be triggered by common nuisances like animal movements and weather, resulting in fewer false alarms.

Kuan also reviewed Axis’ network audio systems, which offer security-based applications, such as mass notification and gunshot detection, but can also be utilized day-to-day for paging and broadcasting marketing messages.

In some cases, security and marketing can be part of the same package, said Kuan. For example, pre-recorded audio can be triggered if a person is detected as loitering in a specific area. Baby departments might be targeted by would-be thieves, since baby formula is a valuable commodity and potential theft opportunity. A pre-recorded message that simply says, “Thank you for shopping in the baby department” could also serve as a reminder that the area is being monitored and thus deter thieves. These types of solutions “make surveillance systems more robust,” offered Kuan.

Anyvision, an AI solutions company, is able to identify a person from a video stream without actually having to store an image of that person on file. The key, said Adnan Kichlu, regional sales manager, Anyvision, is utilizing the mathematical vectors that describe a person’s face rather than a picture of the face itself.

Kichlu demonstrated the principal by using a 20-year-old photo of a person to then detect that same person from current video — the geometry, not the image, is the key to detection and recognition. The solution is completely agnostic to the type of camera sensor or video stream it draws data from, he added, and is also GDPR compliant.

Kichlu said his company’s solution can be integrated with an access control solution, such as a turnstile, to allow (or refuse) entry based on facial recognition. It can also be integrated into a smartphone to confirm the identity of the user.

Heat mapping, gender detection and gaze estimation (approximating where a person is looking, i.e. what draws their attention) are non-security related functions that would be of interest to a marketing department, he said.

Nada Ebeid, business development manager at Montreal-based Genetec continued the “beyond security” theme of the meeting with a presentation titled “Your building is talking. Are you listening?”

“Our mission is to really allow people to flow,” said Ebeid of her company, describing how technology enables people to “flow” through public life (public buildings, museums, transit systems, etc.),  by enabling their movement rather than impeding it.

Genetec, known for its video management software, provides other solutions that serve security purposes, like access control and licence plate recognition. It can also provide useful data points of how people utilize and navigate spaces. “Knowledge of how people are flowing through our different buildings helps us make better business decisions,” she said. “Anyone not acting on this data is going to get left behind.”

Ebeid indicated that work spaces are changing as the workforce becomes more mobile. Office real estate can be put to better use if tenants have a handle on how it is being utilized — “security” data (i.e. that generated by cameras, access control and LPR) can be useful in that regard.

Ebeid also cautioned that data comes with a cost if measuring tools are not deployed in a cybersafe manner. She estimated that only 30 per cent of cameras deployed in the field have up-to-date firmware installed. “It’s about managing your exposure and being mindful of the technology you are putting in place,” she said.

This story was featured in the August/September 2019 edition of SP&T News magazine.