Features
The robot revolution is underway

"People said, 'Hey, I would much rather somebody get angry at a device that’s up on a wall or something that’s roaming around than get angry at a person who’s enforcing a rule.” — Mark Folmer, president at Robotic Assistance Devices. 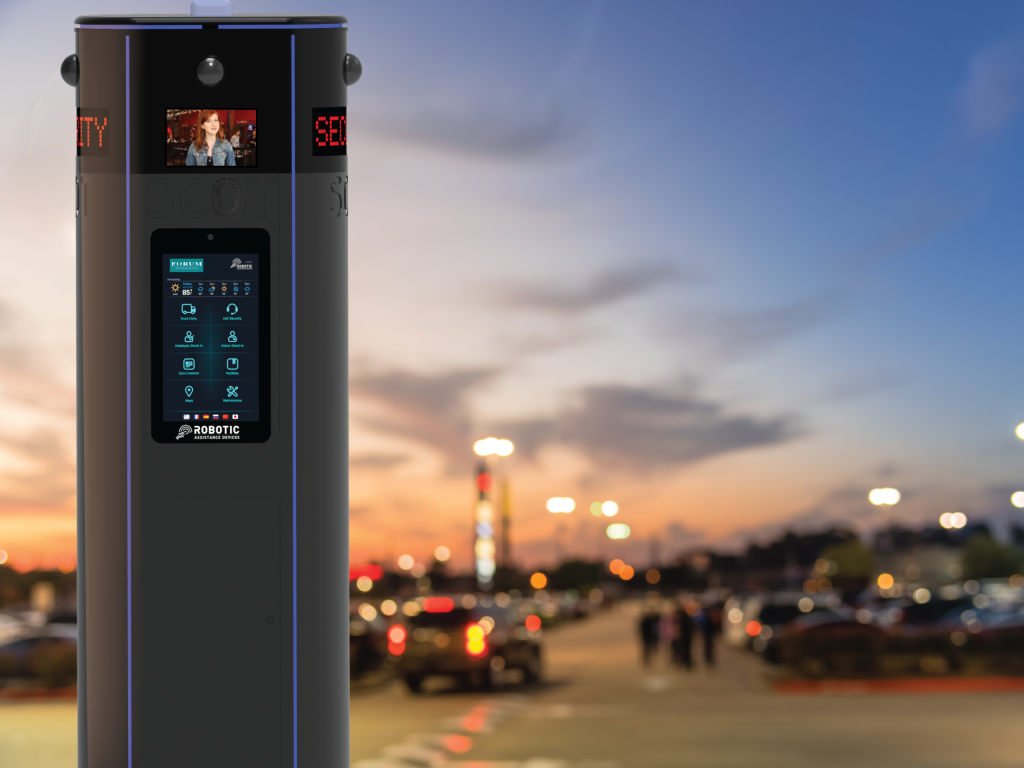 While robotics has established itself in industries like manufacturing, food processing and health care, the security industry is still quite early in its adoption of the technology.

This is how Jason Ouellette, director of technology and business innovation for Johnson Controls has described the current state of security robotics.

The tech that drives the bots
Security robot technology has become more robust within the last decade, according to Ouellette, who noted incidents where robots have demonstrated problematic mobility issues in their earlier stages of development.

In September 2021, Johnson Controls shared news that it has chosen Ava Robotics to power its security robots under the Tyco brand. The company stated that it had made this decision as part of its digital transformation and innovation initiatives. Earlier this year, the company presented the Tyco Security Robot powered by Ava Robotics in Dubai at Intersec 2022.

Ouellette explained that choosing to partner with Ava Robotics came down to payload and allowing them to integrate their own video management solution, which can either be VideoEdge, Exacq or any other VMS that is ONVIF compliant.

Since Ava’s technology allows Johnson Controls to integrate its own video products, this provides what he described as a more seamless, unified experience. 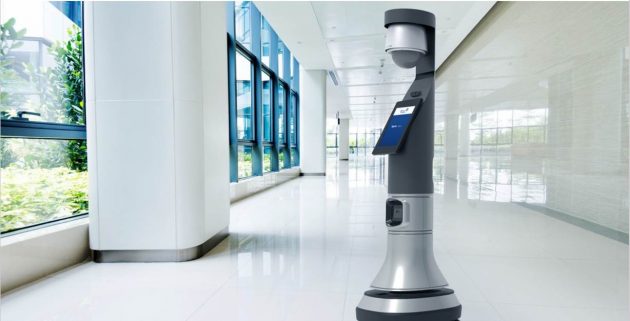 The camera sitting at the top of the Tyco model records while Ava’s technology ensures video continuity even in the event that a Wi-Fi connection is lost. Another feature which helped Ava make the cut for Johnson Controls was ledge detection to ensure the robot doesn’t fall down a stairwell — an important component for building inspections and patrols.

“Their autonomy engine really met the needs of what we’re looking for,” said Ouellette.

He noted that Ava now has a partnership with Cisco Telehealth which has introduced the Telepresence nurse robot.

“That is momentum that we wanted to build on. The fact that our security robot and the telepresence robot run on the same platform means we can have both robots,” he said, adding that the addition of another robot under this partnership would come without charge and without the need to retrain the machine.

For one of Silicon Valley’s security solutions providers, Cobalt Robotics Inc., established in 2016, simple tasks such as navigation through doors and elevators signify major technological advancements.

“In robotics, we were the first robot company to deploy a system that could work on any elevator without modification,” said Cobalt’s founder and CEO Travis Deyle.

Deyle shared clips from Cobalt’s YouTube channel which depicted one of their robots lifting its arm to press an elevator key then turning and gliding through the opened elevator doors.

“It seems very simple, and conceptually it is, but it’s an incredibly complex task to pull off.”

Deyle said another major change has been integration of access control technologies from LenelS2 and Genetec.

“The big data lakes where all of security technology is pushing events and alerts — subscribing to them and being able to automate the workflows. Those have been the biggest changes in the last two years,” said Deyle.

Last month, AITX received an order for five of its robots. The order came through its wholly-owned subsidiary, Robotic Assistance Devices Inc., for Cancom Security, a provider of private security services based in Ontario.

Cancom’s vice-president Paul Baziuk explained that RAD’s security robot, the ROSA, is one that highly complements a guard-based business like Cancom.

“It’s really eyes and ears at a site where the guards can be focused elsewhere,” said Baziuk.

Additionally, the ROSA has a lower operating cost than a human guard and provides additional value, according to Baziuk. That value is in the technology, some of which Ouellette also described.

As Baziuk explained, the ROSA has two cameras on it, a display, a speaker and other components that enable communication with persons in front of it in real time.

“It’s really high-tech. It’s new technology that I think will provide a lot of value to clients that have security guard services at their site,” said Baziuk.

Ouellette noted that not only will a robot never call in sick, companies can incorporate AI and analytics into the robots to capitalize on their deployment.

“Not only am I able to see what the robot is seeing, but analytics are running in the background and convert on things that are abnormal,” Ouellette concluded.

Rather than thinking of robots as guard replacements, Sherman Brawner, vice-president and general manager, Allied Universal Technology Services, said he views them as replacements of the more repetitive aspects of a guard’s job and an augmentation to his or her tasks.

Brawner explained that robots are good at observation and reporting. But unlike a human guard who has experience and training, a robot cannot yet collect details from its environment and use them to make a decision. Therefore human in the middle is still a necessity.

“In many cases, what we may be doing is putting the robot out in the dangerous area and putting the person who interacts with them at a spot where they can interact with the robot and maybe other security technology. So the guard didn’t really go away. What he did was become smarter,” said Brawner.

Autonomy is another key factor in determining verticals for security robots.

In the case of Johnson Controls and Ava Robotics, the ability to deploy one of their Tyco robots without the need for any human involvement or the need for the human ability to drive a robot was a big selling point for the company. As Ouellette expressed, the absence of any human interaction embodies the true spirit of autonomy.

Brawner said the most important verticals for security robots are commercial real estate and retail.

He attributes this to the fact that both environments have the highest mix of people and the most dynamic ability for interactions. In both scenarios, robots lend themselves as a moving set of eyes.

Brawner noted that since robots have recorded voices that enable them to speak, they can greet tenants or clients in a retail setting once their presence has been detected which could also fulfill an advertising role for the business and benefit the owner.

Another area where interest in security robotics is growing is in dangerous environments like petrochemical plants or chemical manufacturing facilities where a human might come into contact with noxious gases or a hazardous substances.

He explained that customers will approach their channel partners with a security problem to which they will respond with a solution that includes some combination of security officers, an access control system, a background check and two or three robots, for example.

It’s the people who have a profound grasp of how robotics technology works who are the most adept at selling it, according to Ouellette.

He added that these aren’t the sort of products sold through PowerPoint presentations and virtual discussions. Bringing these products to live demos and conferences is key to driving market adoption.

“It’s seeing, touching, believing and seeing the value,” he said.

Robots and the pandemic
The spread of the highly contagious coronavirus and all of its social, political, economic repercussions pushed security robots onto the market in three ways.

Firstly, several industries suffered labour shortages and the security industry was no exception. Security has struggled to secure resources and talent for guard positions specifically. There is also a high turnover rate in the industry. All of these factors combined have accelerated robot adoption, according to Ouellette.

Brawner noted that COVID-19 created the necessity for symptom screening and compliance reporting.

The purpose of using this approach to coronavirus screening was to reduce the interaction of a person checking temperatures while recording images and gathering other information to ensure compliance with policy.

Machines deployed to this type of scenario were able to produce exceptions from the information gathered and made them available to a remote handler or an agent monitoring the outcomes.

Additionally, robots served to detect persons not following social distancing measures in public places as well as calculating the total number of people in a given space. They also served to detect whether people adhered to mask policies.

“They can be in areas with people in fairly close contact, and not get sick or be concerned about being in a high-risk category of exposure, all while gathering information and sending notifications when applicable,” he later wrote in an email to SP&T News.

Since robots proved capable of fulfilling essential COVID screening duties, what followed was the recognition of these devices and their software as potential alternatives to people while eliminating the risk of exposure or further spread of the virus.

Lastly, the height of pandemic restrictions brought forth angry and aggressive behaviour from some members of the public towards individuals in frontline roles like security guards.

According to Folmer, the growing concern for the personal safety of security guards made robots more attractive to the industry.

“People said, ‘Hey, I would much rather somebody get angry at a device that’s up on a wall or something that’s roaming around than get angry at a person who’s enforcing a rule.”