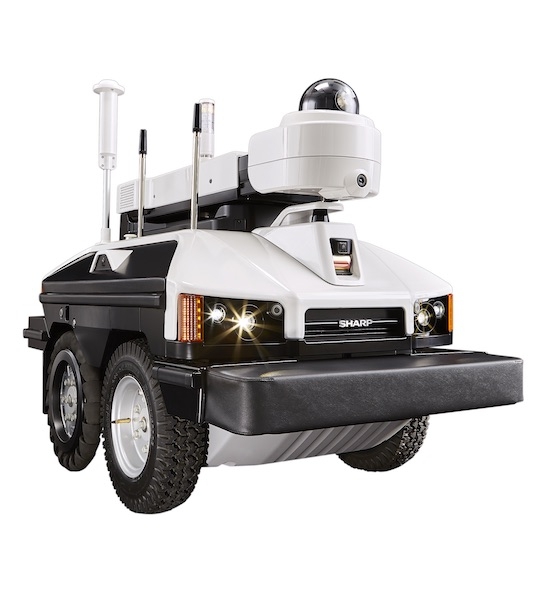 Let’s explore the current market for these robots, their intended uses, synergies with other robotic systems — as well as some unintended consequences.

First, it’s important to understand what a UGV is and its different applications.

UGVs “are basically self-navigating computers with large amounts of processing power and storage capacity,” explains Alice DiSanto, director of marketing for Sharp Robotics Business Development, manufacturer of the Sharp INTELLOS Automated Unmanned Ground Vehicle (A-UGV), and an expert at Robolliance. (The Robolliance is a “forum for technology partners and industry experts in robotics, surveillance and security to advance the understanding and awareness of the Autonomous Robotics marketplace,” according to the organization’s website.)

DiSanto says these “self-navigating computers” are equipped with observation technologies, which can include cameras, microphones, speakers, thermal vision and chemical detection. They can also be equipped with alarms, flashing lights and voice announcements to report security breaches.

UGVs are used for a wide range of applications such as data and location capturing, gauge reading, gate checking and door/window/fence-line scanning.

“For a person to drive around … the perimeter of the property, it’s inevitable for the human to become bored and drowsy and exposed to the risk of accidents,” she says.

But “the ground vehicles are great to patrol non-stop for days at a time and to be able to detect small changes in detail.”

“UPS, for example, has an active pilot system where you have a UPS van, which is initially driven by a human — eventually it will be autonomous — it goes to a neighbourhood, the roof slides open and drones lift off with packages,” he explains.

Many of the smaller robots — both Unmanned Aerial Vehicles (UAVs) and UGVs — have a more limited range, so driving a van to a neighbourhood and then using UAVs or UGVs for the last hundred meters or so “is a very, very good combination,” Kirk says.

When it comes to security, however, DiSanto says UGVs should not be used as stand-alone security systems. Instead, they should be fully integrated with other systems and manpower resources to create “comprehensive situational awareness.”

“They can capture people’s faces, and facial image processing has come a long way in the last few years,” Kirk adds.

Additionally, in large, crowded areas, two or three UGVs in the same space could triangulate a gunshot to determine the shooter’s location.

For example, the Sharp INTELLOS A-UGV is equipped with high-resolution cameras and follows a predetermined route within fenced areas.

The A-UGV “can navigate patrol paths along waypoints, recording and securely transmitting to security personnel, allowing them to decide when human inspection is necessary,” says DiSanto.

Sharp introduced the initial version of the A-UGV in September 2016. This version had “the features that were most requested and most critical to the security market,” based on customer, sales and industry feedback.

One of the main differentiators was a thermal imaging camera, says DiSanto.

“Unlike a traditional guard, you now — with thermal imaging — have vision all hours of the day and also under variable weather conditions. So it literally extended the capabilities of the human eye,” she says.

Beyond UGVs: working with UAVs

The “capabilities of the human eye” can also be extended through integration with UAVs.

DiSanto advocates for integrating UGVs with other technologies, and looking at “the strengths and weaknesses of each one of the robotics platforms and help[ing] them work together to fulfill … your unique needs.”

If an intrusion occurs at a facility, a UGV can capture and document observations, and has the potential to communicate with its human counterparts, she explains.

“If there was this intrusion and the intruder were then to flee, if in the arsenal of that particular end user … they had a UAV, because of the speed of the UAV and the vantage point, that technology would be able to get this vehicle in pursuit of the intruder and continue on with the observation.”

Additionally, UGVs and UAVs can be used together to help law enforcement stop the delivery of contraband to prisons, Ziemba says.

Drone detection solutions, also known as Counter-UAS (C-UAS), can be used as part of an overall risk mitigation strategy, she says.

When a C-UAS system detects drone incursions at security-oriented organizations and correctional facilities, rather than send humans to a potentially dangerous perimeter, you can “automatically send UGVs to safely capture evidence that can be used to prosecute while local law enforcement travels to the sites,” Ziemba explains.

“With advanced intelligence, a UGV equipped with infrared cameras and other detection technologies can be placed in an area near the expected incursion location to confirm activity and alert appropriate resources,” she elaborates.

However, integration with UAVs faces some regulatory restrictions.

“Today, one could certainly remotely direct a UGV to a specific location for further inspection or tasks based on data obtained from a UAV flight,” Ziemba says.

But, the current regulation states that UAVs cannot fly beyond visual line of sight (BVLOS). Ziemba foresees a potential integration where UAVs fly without a human pilot’s involvement or BVLOS.

Nevertheless, Ben Waters, CEO of WiBotic, a Seattle-based provider of wireless power and battery intelligence solutions for robotic systems, says UGVs could be equipped with landing pads for the deployment and retrieval of UAVs.

“Relatively large UGV batteries provide the power source to recharge drone batteries after each flight, often through the use of wireless autonomous charging systems that eliminate the need for a human involvement,” he elaborates. “The solution allows UGVs to rapidly expand surveillance and incident response into areas that are otherwise inaccessible.”

Matt Carlson, vice-president of business development, WiBotic, explains that while such a solution has not been implemented yet, the company is working with a few UGV companies who are exploring this capability.

Yet even when using UGVs and UAVs together to expand surveillance capabilities, Waters points out there is a technical setback: UGVs and UAVs must make contact with a docking station to recharge. For a robot to be fully autonomous, Carlson says, “it truly needs to be able to recharge itself autonomously.”

WiBotic creates wireless power and battery intelligence solutions because “power has not been a point of optimization for autonomous systems in the past,” Waters explains.

Prior to the introduction of wireless charging, the robot had to make physical contact between probes that protrude from it and connect with the power source, Carlson explains.

“Any mechanical contact … has a rated number of mating cycles,” Waters adds. This means that after plugging in the UGV a certain number of times, it won’t establish a good connection and will need to be replaced.

Robots are also exposed to harsh environments, dirt and dust. Outdoors, the corrosive effects are compounded because of the introduction of water.

Over time, arcing occurs with those contacts, to the point that you “end up with human beings still running around … maintaining those charging stations,” Carlson says.

In contrast, “wireless [charging] is fully sealed up, and so we can protect the electronics and it’s just plastic on the outside,” says Carlson.

“Exposed contacts, if they’ve got electrical voltage on them, are subject to, in different countries, different levels of regulatory requirements and enclosures and safety provisions,” Waters explains. While wireless charging has its own regulatory requirements, “it at least eliminates some of those challenges that might otherwise add a lot of cost.”

Wireless charging also allows end users to be strategic about where robots are placed since they do not need to follow a physical docking procedure.

“With wireless you can deploy the charging infrastructure throughout the space they’re operating and achieve a model where robots can continue to operate and get charged when they need to, which is a model that we refer to as ‘Opportunity Charging,’” Waters explains.

The impact on humans

Despite these difficulties, Waters and Carlson both believe that 2018 will see more robots in deployment.

When asked how this might impact human guarding, Waters says the initial deployment will be very co-operative between robots and humans.

“You can think of the robot as the means to collect the data; they can drive in areas that are difficult for people to frequently survey, they have very nice software platforms that may call up the data very easily … but they’re not taking any action,” he explains. “It’s going to be the co-operative effort with humans to take action and understand what to do with the data.”

Likewise, DiSanto says guards will still be instrumental. In fact, guards are currently trained on the hardware and software capabilities of the robot. Consequently, they can program UGVs to perform the missions required for outdoor perimeter security.

However, Kirk points out that there are potential negative consequences to the increased deployment of autonomous robotic systems.

“The flip side is that these devices can be used by terrorists,” he explains. “You could take one of these … unmanned ground vehicles, pack it full of [explosives], program it to go to a certain location and detonate.”

“One of the truisms of technology is most, if not all, advances in technology do carry a downside of one sort or another,” he concludes.

Despite this, Waters believes “UGVs will be a mainstay of security in the coming years.”

This will especially be the case in “applications where constant coverage of large areas is required. Working together with their human counterparts, UGVs will offer a broader security presence in venues such as malls and sports arenas, both deterring crime and offering faster response when needed.”

This article originally appeared in the March 2018 issue of SP&T News.
Print this page