Kevin Bradley took over as president of IndigoVision’s North American operations in September 2010. He came from OnSSI where he was North American sales director and had developed an expertise in open architecture VMS systems. He now heads up sales, marketing and support in the U.S. and Canada. Six months into the position SP&T News spoke to him about how he sees the market and how manufacturers have managed to weather the downturn.

SP&T News: When you took over in September did you change the operating structure at IndigoVision?

Bradley: We’ve started an expansion of IndigoVision on a regional basis. The goal is to gain greater market prominence in all of North America. If we look at IndigoVision before I joined, it’s been around for eight years and enjoys an incredibly good reputation from a systems perspective for the integrators who deploy it and the end-users who end up using it. Until a year ago though, we really weren’t in the open architecture arena as a leading player in open architecture. With the incorporation of our ONVIF 4.2 software I think we’re one of the new leaders in open architecture platforms, but from a different parameter.

Whereas everybody else is using server-based topology, our distributed architecture really makes it easy to deploy. It allows it to be deployed without any single point of failure, and makes it such that it’s flexible so you can add to it without doing any major upgrades to servers. Because of the topology it has very low latency. Compared to our competition there is no latency in using a virtual PTZ.

We also have a great audio synch so for use in government applications, interview/interrogation rooms we’re the go-to company for that kind of product. So the question for me was, why isn’t IndigoVision known as being on the leading edge of where VMS is going or where IP is going? We enjoy a good partner base in Canada. Any company would be proud to have the type of partners we have in Canada. They do their designs and installations well and offer incredible customer service. When you meet them it’s like a homecoming. It makes my job incredibly easy.

SP&T News: When you say, expand on a regional basis, what do you mean?

Bradley: In North America we’re really one market but we have regionalized our territories so we can offer enhanced customer service to the end users and integrators and added positions in California, Arizona, Nevada, Utah and brought on a highly skilled manager in Jeff Swanson who has worked for Bosch and Diebold driving business in the government sector. Bill Morehouse is an experienced manager in Texas, Oklahoma and Mississippi. He has experience working with architectural engineers and consultants working the integrator channel and correctional channel. Andrew Myones is the regional security manager who came to us from the world of distribution. We also brought on Ted Marolf to manage the Pacific Northwest and Midwest. He was most recently involved in systems integration with OnSSI, where he served as Western Regional Manager and prior to that, as Systems Development Manager at Johnson Controls.

In the Greater Toronto Area, Allan Bjork is helping us to manage in Canada. We are searching for the right candidate in Western Canada, who is technical, dynamic and can help drive business in Canada for our integrators in that market segment. We have also moved Scott Coulson, formerly part of the field team to the position of application development manager, to deliver new business through consultants and end users for Indigo Vision partners in Canada.

The intent is to make our integrator/dealer base even stronger. We are not looking to bring every integrator into the IndigoVision fold. We really view it somewhat as a platform of partners that give us input and help us design our next generation of products.

SP&T News: Are you launching anything new at ISC West next month?

Bradley: We are launching our new Control Center 4.2 platform and that is an ONVIF compliant software platform. It provides users the comfort in that the system is made to work end-to-end but still gives the capability to use whatever cameras are ONVIF compliant. We also truly do integrate with over 25 access control platforms and we’re adding more all the time. We also integrate with a number of POS applications and have SDK and open API that we are willing to share if people want to take systems and tie them into ours. 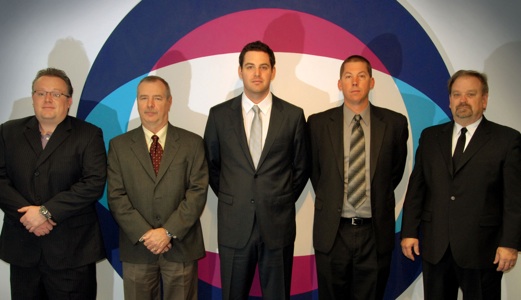 SP&T News: With respect to the market and how the economy has been in the last couple of years, did you notice any kind of downturn in terms of the number of systems sold? What’s your sense of how the market is going, generally?

Bradley: I think the market in general saw a slowing of movement of where it had been and a lot of manufacturers looked at 2008, 2009 and even 2010 with a mind that even if they were flat they were still doing OK. We continued to grow at IndigoVision because of the markets we are in and the way the systems are applied. I will say that overall most manufacturers and IndigoVision included, did not see an overall slowing in the market but more a contraction in the size of the projects. Where a project might have been 1,000 cameras deployed over a period of 12 to 14 months it shrank to 250 cameras over 12-14 months.

People were still moving forward and looking for ways to enhance, increasing or replacing their existing infrastructure.

SP&T News: You have a lot projects in the government space in Canada. Would you say those are still forthcoming this year?

Bradley: Absolutely, we did see growth in the Canadian market and continue to see large-scale projects.

SP&T News: Do you think ONVIF will continue to emerge as the dominant standard?

Bradley: We’re always looking to incorporate the best ideas. I think (IP VideoMarket.info) John Honovich had an article recently declaring ONVIF the winner, and from a corporate perspective we decided to go the ONVIF route. That is not to say we were not interested in PSIA, but if ONVIF is going to be the de facto standard we will support it. If we see PSIA continuing to emerge we will support that as well.

SP&T News: What do you think about the concern about a lack of technical skills out there for the industry?

Bradley: There is always good talent available. There are good people, good sales people, good managers, good technical people and good customer service people — it really comes back to the company philosophy and expectations of the company. My company and management style give people the avenue to do what they do best.