For the past 50 years, Mac's Convenience Stores have served the needs of Canadian customers throughout a multitude of locations in Ontario and Western Canada. Beginning in 2007, Mac's transitioned from their old analog surveillance system into a digital platform. 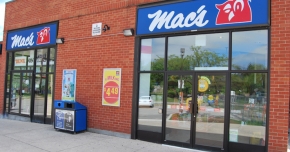 Provide equal, but individualized, security
As can be expected with such a large geographical footprint, the dynamics of individual Mac’s stores greatly vary. Some are located in metropolitan cities of considerable sizes, others in rural areas. Some are more heavily trafficked, and others less so. Some are much larger with busy gas stations attached to them, where others are simply of the convenient store variety.

At issue was, there were a great deal of variance between individual stores throughout Central and Western Canada. However, regardless of this variance, Mac’s required each of its stores to be secured.

To address this issue, Mac’s hired the Canadian security firm Reliance Protectron to act as integrator for this solution.

John Watts, National Account Manager at Reliance Protectron, decided something other than a one-size-fits-all approach for DVRs was needed: “We had to initially take into account the specific dynamics of each store. In some cases, smaller convenience stores were in rural areas and had enjoyed years of service without any security incidents whatsoever; but in other instances, certain Mac’s were in heavily trafficked urban environments where customers primarily visited the stores to purchase gasoline. Both usage and history of previous theft, etc., needed to be understood.”

For Mr. Watts, key to this effort would be Hikvision’s iVMS-5000 software. This software allows Hikvision hybrid DVRs (such as the 9000 series used in this solution) to connect to Mac’s central security operations in Toronto via the Internet. Currently, each individual Mac’s store largely handles its own security footage and issues; however with the introduction of this iVMS-5000 software, Toronto now has the ability to access stores’ security footage, automatically update DVR features, and better future-proof individual stores for the time when more interconnectivity may be required.

However, before any specific DVR units could be selected for individual stores, testing was required. Mr. Watts continued, “It was decided the DVR’s would be secured in an area accessible only by the store manager after a predetermined time-lapse period to provide additional protection for the DVRs … so they cannot simply be picked up and stolen by the bad guys in a theft.”

As earlier noted, the particulars of each store greatly varied. Since most of these stores used preexisting black and white analog cameras, the specific Hikvision DVR model was selected based on the number of cameras at a store. Since both of these Hikvision DVR series offer a range of channels, a rural store with only a few cameras would receive a different DVR model than a branch in Toronto that had 16 cameras for its store and adjacent gas station. Regardless of channel number, each model includes 2 terabytes of hard-drive space to ensure enough memory is available.

In this fashion, the DVR solution was specifically tailored to the needs of the individual store – providing maximum coverage, but without wasting resources.

“As a business professional in the security industry, it is important to identify a service provider that completely understands the needs of your business and will be there for continued support of their product solution,” stated Sean Sportun Mac’s Manager, Security & Loss Prevention “The team at Hikvision are true professionals who exemplify the term ‘customer service’ and their product is top notch in this growing age of technology”.

Mr. Watts explained, “A number of surveillance upgrades are being planned. We see the point-of-sale area as critical, as well as additional coverage for problematic gas lanes and stores that experience a higher crime rate.”

Furthermore, if an individual store grows, or needs additional cameras, the hybrid DVR’s hard-drive requirement may also change. Hikvision’s 9000 Hybrid Series allows additional terabytes of memory to be inserted while still in the field. This unique feature saves time, effort, and the cost of providing a temporary DVR while the existing DVR is being serviced in a repair center – a feature most manufacturer’s models do not provide.

Honeywell Security and Fire
Mississauga, ON