Headlines News
Go West: One of the industry’s most prominent trade events continues to be a barometer for technology trends

Depending on how you look at it, ISC West reflects security trends or helps to create them. This year, the Las Vegas security industry conference and expo comprised three broad areas: drones (thanks to the “Unmanned Security Expo,” a showcase of UAV manufacturers and related providers located on the show floor), artificial intelligence (touted by several manufacturers and showcased by first-time exhibitor and GPU specialist Nvidia) and the Internet of Things (boosted by the presence of the “Connected Home Pavilion,” a subsection of ISC West populated by home automation vendors). 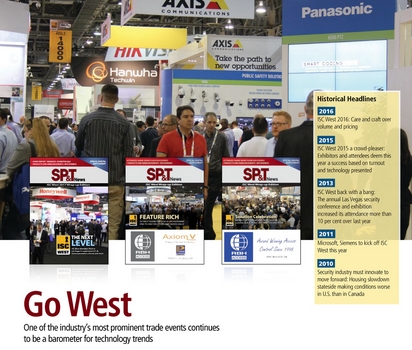 Looking back a scant 12 months, cyber-security was trending at ISC West 2016 — manufacturers of IP-based devices were quizzed about their ability to resist or repel cyber attacks. IHS analyst Jon Cropley told SP&T News immediately following the 2016 event that “the focus on cyber protection seems to be increasing. I meet lots of vendors at ISC West each year and few of them mentioned cyber protection in 2015. This year, many of them did.”

In 2015, Will Anderson attended his first ISC West. Anderson was relatively new to the security industry, having just joined incident management firm PPM (now known as Resolver) as its CEO. Anderson observed that there were several drones and robots on display at the 2015 ISC West, but their presence was hardly overwhelming. “I’m going to put a bet on it. Maybe it doubles next year.” (Drones would of course more than double by April 2017.)

Looking back at 2014, CEO of Toronto-based integrator Veridin and SP&T News advisory board member Colin Doe said he attended that particular event in order to research Cloud-based access control systems, commenting that he visited with Avigilon, which had acquired access and identity management firm RedCloud the year previous.

Stepping back to 2013, mobility was a popular topic of conversation as an increasing number of security apps became available for devices. Bosch also previewed its 4K camera, a technology that would become ubiquitous at trade shows by 2014, but perhaps was ahead of its time. Earlier this year, SP&T News ran an article about 4K’s inability to capture the market due to cost concerns — but recent improvements in video compression technology could help 4K enjoy a brighter future.