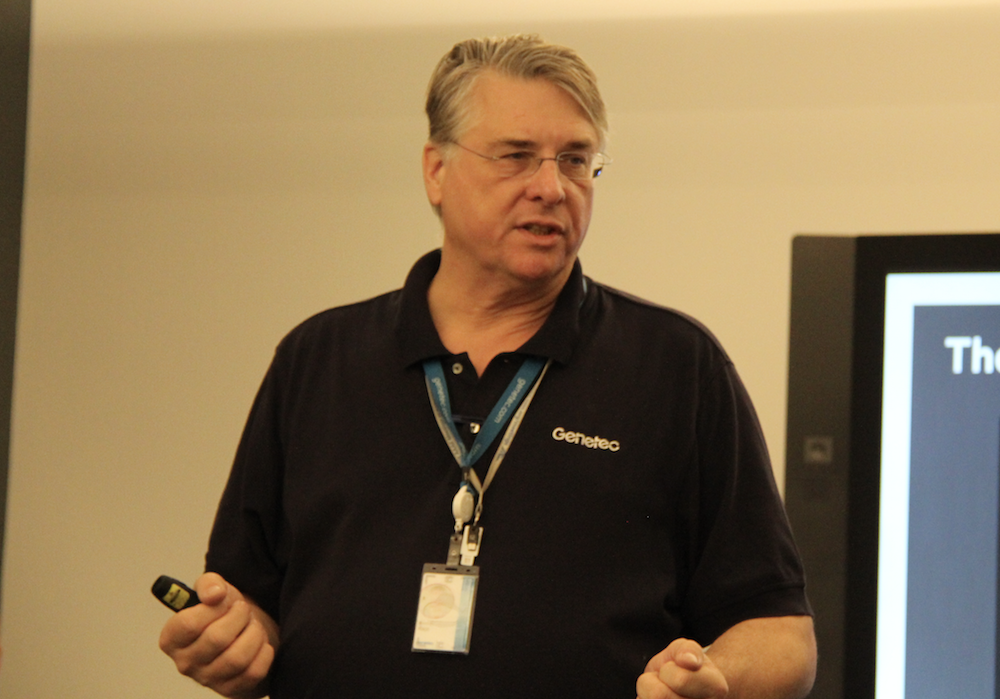 Genetec recently earned a feather in its cap — a No. 1 global ranking for its video management software, according to research firm IHS Markit.

But the company made it clear during a recent press summit that this accolade, while much appreciated, is definitely a feather, not the cap itself. Genetec made its name in surveillance software, but has increasingly pivoted towards solutions that address issues that affect more than just security and asset protection. (IHS Markit also released its access control rankings in July, recognizing Genetec as the No. 3 provider of access control in North America and No. 6 globally.)

According to Genetec’s vice-president of marketing, Andrew Elvish, the company has consistently achieved a 30 per cent CAGR (compound annual growth rate) over the last 12 years and invests 28 per cent of its top-line revenue back into R&D. It is also privately-held, which “gives us a great deal of freedom, it gives us a great deal of latitude to do what we want.”

Genetec has almost 20,000 global end users (Elvish stressed that its main market is enterprise-level customers) and its video business alone is growing at 22 per cent annually, outstripping the market growth rate.

Elvish also said that Genetec has inverted its priorities in recent years. It once was video first, followed by operations, then intelligence. Today it is intelligence first.

Racz, an outspoken proponent of privacy and integrity in security systems, began his presentation with an affirmation that security, as an industry and profession, is generally moving in the right direction: “Their job is to measure the flow of people, things and information,” he said. “Security is no longer the cost centre, but integral to the decision-making of an organization.”

He quickly moved, however, to the topic of the internet and its deep failings, comparing its status to that of an urban water supply before the advent of modern sewage systems. “There is fecal matter in our information supply,” he said. The development trajectory of the internet is steep and impressive, but its rapid rise has come with significant costs — chief among them, it is frequently untrustworthy and easily polluted.

“The effluence of our civilization is leaking into our information supply. And who does it harm? The very young and the very old,” said Racz, comparing Internet predators to contagious diseases that prey on those age groups.

Old paradigms of data security, with firewalls that protect network perimeters have given way to the “new perimeter” of identity. “You have to know who you’re talking to,” he said. “Establishing the identity of machines and people is of critical importance.”

He also called for more accountability in the information security market — particularly in light of recent data breaches — which could be accomplished with the equivalent of the Sarbanes-Oxley Act of 2002. SOX, as it became known, is a U.S. federal law that came to prominence as a means to regulate corporate conduct. It sets out a number of regulations designed to hold public companies and their corporate officers accountable for their actions, with serious criminal penalties for misconduct.

Sean Lawlor, Genetec’s team lead, data science, continued the theme of veracity in security by discounting the notion that artificial intelligence, in the truest sense of the term, currently has a practical application. “We’re not anywhere near AI,” he said. Machine learning (or deep learning, a specific type of machine learning) is a more accurate reflection of today’s capabilities. Machines excel at repeated tasks, he said. In the security context, that could mean scanning video data for people wearing red hats and relaying that information to an operator.

Racz added that Genetec’s focus is more on IA (Intelligent Automation) than AI. “IA is where we’re putting our marbles,” he explained. The emphasis is on human input with machines doing the heavy lifting and repetitive tasks.

In his presentation, Lawlor said that Valcri will be useful to Genetec and its customers for its capacity to give data meaningful context. (Genetec said it will reveal more about Valcri later this year.)

Stephan Kaiser, general manager of Genetec’s AutoVu automatic licence plate recognition suite, addressed a topic that appears mundane on its surface, but is vital to the functionality of a city: parking.

“There’s emotions involved,” he said. “It affects our everyday lives… If your parking experience goes badly, there’s a good chance the rest of your evening will go badly.”

He said 30 per cent of traffic is caused by drivers cruising for the cheapest parking spots, and more people are choosing their jobs based on how long their daily commute will be.

The world of parking is becoming more digital, less hardware focused, he said — the aim is “frictionless” parking, with fewer literal barriers between a driver and a parking spot, and cashless payment. Customers are getting rid of parking gates whenever possible, he said, preferring better integration with payment systems enabled by licence plate recognition tools.

There is also a desire on the part of municipal managers to have a better accounting of the actual number and location of parking spots in their cities. The curb itself is an asset, since it is integral not only to parking spots but deliveries. It is also desirable, since the curbside usually represents a premium parking spot. As such it is often underpriced, said Kaiser, compared to hourly rates charged in parking lots. Raising curb rates will free up more spots, he added, and dynamic pricing — based on scarcity — will also help to manage traffic flow.