Features Applications
Gallery’s security is state of the art 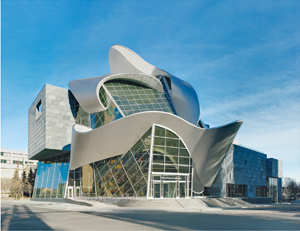 Like many art galleries today, the new Art Gallery of Alberta doesn’t just house works of art. It is a work of art. But where arcing structures and moveable walls take the place of regular ceilings and rooms, it can be difficult to find a place to put a security system, and one good enough to protect millions of dollars’ worth of art. Such an unconventional building called for an unconventional solution, and it was found in a 100 per cent IP-based security system that has fully integrated access control and CCTV systems.

“This was definitely — from an architectural standpoint — the most unique building we’ve ever worked in,” says Kevin McKay, national sales manager for Edmonton-based Genesis Integration, which during 14 months helped design, supply and install the system.

In setting up the $500,000 system, he says, the central problem was the lack of places to install equipment. Built largely of glass and steel, the gallery, which opened Feb. 1, had few straight, vertical shafts through which cable could be run from one floor to the next. Open ceiling space was rare, and there were few electrical rooms. It was this unusual construction that made them decide to go with Power-over-Ethernet (POE) access control card readers, interfaced to Genetec’s access control software, Synergis.
“The choice to go to an IP reader eliminated the need for the conventional access control panels that typically get installed, usually in the ceiling above the door frame or in an electrical room or communications room,” says McKay, adding it was the first time the company had installed POE card readers. “So it’s a very distributed system, as opposed to a centralized or compartmentalized system.”
With so much valuable art, McKay adds, the gallery had to be able to limit the ability of the staff and visitors to wander about the building. The card reader system not only allows them to control who goes where and when, but also gives them an audit trail, telling them when an event occurred. Each employee is issued an access control card, and every time they go up to a card reader and use the card to unlock a door, a log entry is created in the software.
“So you can search through those logs by door or by individual and get a full history report on where this person has been over the last day, week, month, year, what doors they’ve been through. And it’s all time and date stamped, so it makes for a really powerful investigation tool, after the fact as well,” McKay says.
What makes the POE reader different is the wiring it uses, says David Chauvin, Genetec’s regional sales manager, Pacific Northwest. Instead of using traditional master panels which connect to sub-panels through RS485 wiring, HID’s Edge controllers use standard Cat 5/6 cabling and can be powered through POE. For most users, its main benefit is its cost. “The total cost is going to be less than the traditional system because you have less labour involved and less wiring. It’s also easier to do central management of the system with a system that’s fully IP,” he says.

Public access is controlled through software settings that automatically lock and unlock doors. The gallery’s main doors and those to other rooms, such as the gift shop, lock and unlock on a schedule set by management. Elevators also control public access: visitors who press a button for a restricted floor must swipe a card.
The camera system software, Genetec’s Omnicast, is integrated with the access control system on a unified platform called Security Center. The product decreases the number of workflows that operators need to learn, Chauvin says. “It makes the whole process a lot more efficient by using a single application to control both video and access control. That’s the biggest benefit to the art gallery; by using both Synergis and Omnicast, which are access control and video pieces, they end up using a single application on the client side.”
Another advantage of the unified platform, he adds, is that, because Genetec provides just the software, the system can integrate with different hardware manufacturers. So clients have more choice in designing their system, he says. “That gives them a lot of flexibility when choosing which type of camera they’re actually going to use because they’re not limited to a specific company.”
The integrated system means that every audit trail event has an associated video, McKay says. “If I see a door was unlocked at 3 a.m. and it seems suspicious, I can bring up that history. It can show me who went through that door at what time, but it can also bring up video associated with that as well. The events are linked in the software.”
Within the gallery, the CCTV system must cover many more areas, some very specific, than in other types of buildings, says Scott Nye, the gallery’s director of finance and operations. Some artworks require constant surveillance. And exhibits come and go, so that rooms must be reconfigured. The security team often works with the curators.

“We review with them where they are going to be putting up a new wall in a gallery space, for example, and whether or not we need to move any of the sensors or cameras within the space to have proper coverage of the zone,” he says. “It can be as simple as a contractual requirement — that there has to be a camera or multiple cameras focused on a particular piece of art, given the lending requirements imposed upon us through the contract.”
While Nye oversees the big picture, day-to-day security is handled by the guest services manager, a job title that reflects his belief that, because security guards have a lot of contact with visitors, they should be as skilled in customer service as the admission staff.
Before the system was implemented, Nye says, an American security consultant did a full audit, including a review of where every camera and guard would be located. Only minor changes were needed. He says the money spent on the new system is worth it. “It’s a required investment, given the nature of our business,” he says.
“We were building a state of the art building, a world class art museum, and along with that we needed a world class security system.”
In May, five masterpieces worth about 100 million euros were stolen from the Paris Museum of Modern Art. McKay was in New York when he heard the news on the radio. His ears perked up. “I just needed to know where it was,” he says, laughing.”