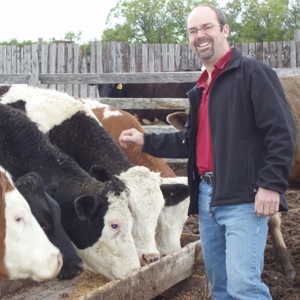 Allen Leigh Security and Communications is a small operation with four full-time employees in addition to founder/owner Chris Sobchuk. The company is located in a 2,500-square-foot storefront in Brandon, a small (pop. 50,000) city tucked away in the southwestern corner of Manitoba.

The majority of Allen Leigh’s customers are farmers and ranchers whose communications and security requirements would be incomprehensible to most.

“Allen Leigh is not your typical business where we carry only a certain product and do one thing only,” Sobchuk said. “We like to find solutions for all our customers.”

For example, a Hutterite colony in rural Manitoba asked Sobchuk to create a way to wirelessly trigger a pump to fill its water reservoir when the latter drops below a predetermined level.

“They had problems with a pressure valve,” he said. “So I figured out a way to send a signal from the reservoir to the pump, which is located over six miles away.”

Another challenge that security integrators in Toronto or Vancouver don’t have is keeping poultry alive.

“We installed temperature alarms in turkey barns that tell the owners if it’s too hot or too cold or if the power goes out,” Sobchuk said. “These alarms have saved the lives of thousands of birds.”

Sobchuk has been involved in communications and security for almost 20 years and farm security for 13 of those years. Allen Leigh, which was founded in 1996, takes its name from Sobchuk’s and his wife’s middle names.

“Somebody jokingly suggested SOB Enterprises, from the first three letters of my last name, but I thought Allen Leigh sounded better,” he said.

The company has grown to become what Sobchuk says is the most diversified security integrator in the Brandon area. In addition to farm security products, the company sells and installs wireless video monitoring, alarm systems, two-way radios, surveillance cameras, digital video recorders, driveway alarms and wired and wireless video and audio equipment.

Although Allen Leigh has customers right across Canada, most are located in southwestern Manitoba. Some are as far away as Dauphin (170 km north of Brandon) and Winnipeg (220 km east). About 80 per cent of the company’s customers are farmers and ranchers.

In addition to carrying products from such well-known manufacturers as CNB, Dakota Alert, Vertex Standard and DSC, the company has its own Implement Cam and Cow Cam brands.
The wireless Cow Cam livestock monitoring system transmits a clear video image from a camera mounted in a barn to a television or laptop screen as far away as two miles, enabling farmers to watch their animals from their homes.

“I created the Cow Cam for local farmers who were looking for quality video and audio so they could monitor their cattle during the calving season,” Sobchuk said. “It has saved them countless trips to and from the barn, many hours of sleep and, of course, undue stress on the calves and the other livestock.”

The Cow Cam comes in four models: The Pro System, the PTZ (Pan, Tilt, Zoom), the PT (Pan, Tilt) and the Economy Cow Cam. Each of the models can be installed by the farmers themselves. The Cow Cam costs $850 ($450 for the economy version; additional cameras and monitor cable extra) and comes with a two-year warranty. Since its creation, the Cow Cam has been adapted for applications in foaling, farrowing, lambing and hatching.

There is, however, a growing market for another of Sobchuk’s farm security inventions, the Implement Cam. It enables farmers to monitor farm implements while they are operating them. The Implement Cam, which comes in pro and economy versions, consists of a waterproof camera, LCD monitor and stereo speakers. The system can be mounted on a wide variety of agricultural equipment, including seeder tanks, grain carts, potato harvesters and horse and cattle trailers. The Implement Cam comes with a one-year warranty and costs $575 for the pro version and $465 for the economy version (extra for additional cameras).

Allen Leigh markets itself by word of mouth in the closely-knit Canadian agricultural community and by regular attendance at farm shows in Brandon, Regina, Saskatoon, Edmonton and Red Deer. Sobchuk says he is thinking of bringing his security wares to a farm show in Woodstock, ON, which is consistent with his long-term goal of making Allen Leigh bigger and expanding across Canada.

Sobchuk says his company has become successful because he offers a customized service for a niche market.

“I can talk to farmers about their communications and security requirements in their own language and offer them personal service when they have questions and problems,” he said. “My customers put a high value on that. They appreciate the personal service and I have the thank-you letters to prove it.”