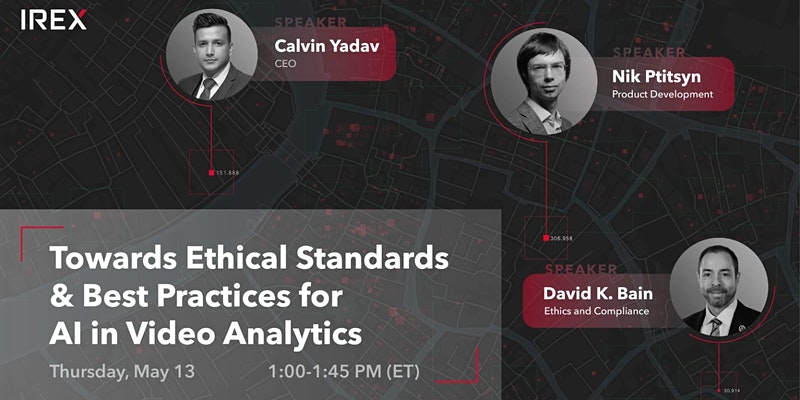 Kicking off the webinar, Bain discussed the ethical standards and best practices for artificial intelligence (AI) in video surveillance that businesses should consider.

“It’s a very serious issue,” Bain said.  “[Organizations] are doing the right thing by taking the first steps forward toward a future in which sensible constraints, through laws, regulations, standards and best practices can help humanity to avoid the dystopian pitfalls of this very powerful technology.”

Bain focused his presentation on the status of facial recognition technology around the world — more notably in Europe and the U.S. — as well as the unique approach that the Technology Integrity Council takes to address technology, safety, and technology risk, generally in a cross domain, and then finished up by highlighting the specific risks and mitigation with respect to facial recognition and AI video analytics.

Some of the issues pertaining to video surveillance in the eyes of Bain include “the problem of massive surveillance for commercial exploit exploitation”, faulty or non-preformative technology false positives, false negatives.

“Another general truth about these new impactful technologies is that a key to their appropriate use is getting to a place of symmetric, understanding and experience with the technology,” Bain said. “By that we mean, we’re trying to avoid a knowledge gap between the OEMs and the users of the technology, Facebook, being probably the most famous example of where there was a dramatic informational asymmetry between the users, and the platform owners.”

According to Bain, businesses can get to a point where they are able “to establish the appropriate limitations and to be able to safely use these technologies” once they have better understanding of what risks are involved with using AI in video surveillance and can apply ethical standards accordindly.

“There is concern over the potentially chilling effect of facial recognition on public protests that if there is a hesitancy or a chilling effect on the right of peaceful assembly,” Bain concluded in his address. “This could hamper one of the mechanisms that our free societies rely on to improve over time, and to push back and agitate for change and progress.”