SP&T News and CANASA engaged with Canada’s security community to find out how the pandemic has affected revenue, operations, work from home policies, travel and more 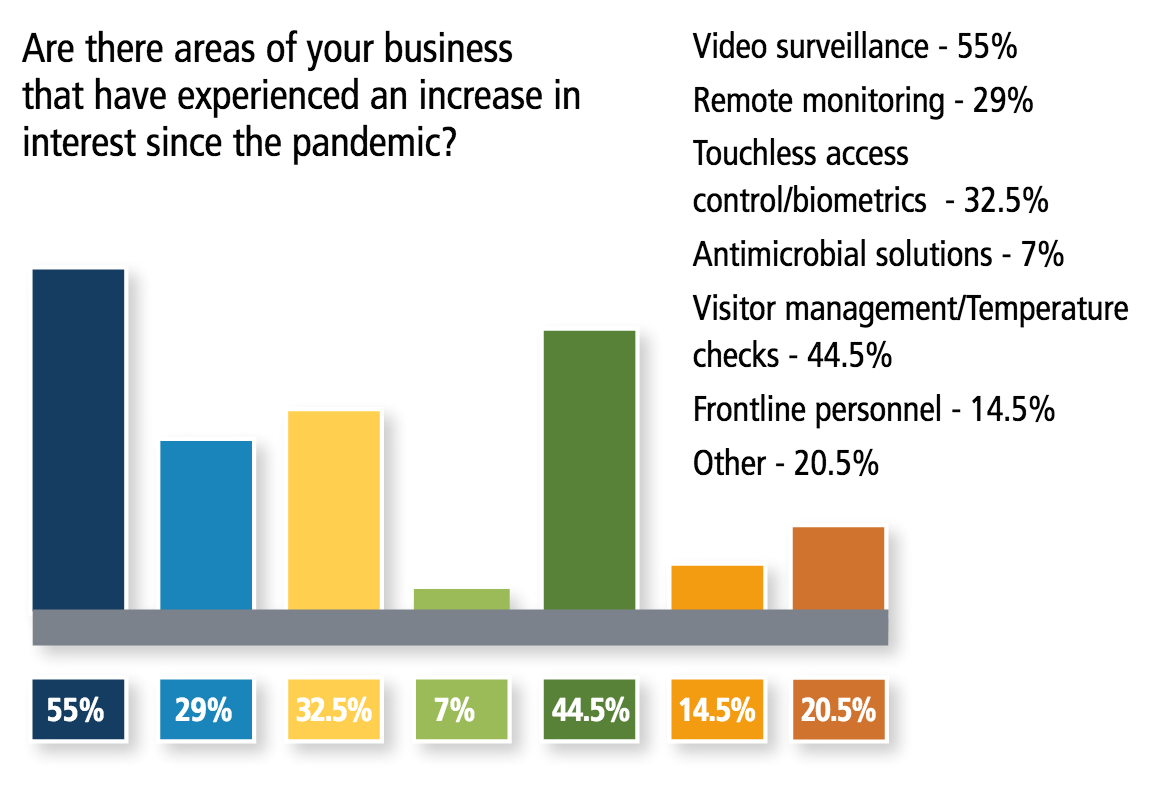 Most businesses have had to weather a rough patch due an economic blip, a sustained downturn, or an unforeseen supply or labour issue, but a global pandemic is basically new territory.

Life since mid-March has been one long learning curve as organizations adjust their business practices, customer relationships, product mixes and service levels to cope with some very challenging circumstances.

SP&T News reached out to the security community across Canada recently in co-operation with the Canadian Security Association (CANASA). SP&T readers and CANASA members were invited to take a 15-question anonymous survey covering everything from business impact to travel preferences to online engagement and community support. The survey was available to take for three weeks (June 18 to July 9) and there were a total of 99 respondents.

The respondents identified their companies as follows:

Respondents were permitted to choose multiple lines of business. (For example, approximately a quarter of the respondents who identified as systems integrators also identified as dealers.) They also selected the areas of business/markets they serve with the majority indicating commercial (97%) and residential (72%). Government/public sector ranked high (67%), as did health care (57%) and education (59%). A minority of respondents (9%) indicated other markets such as cannabis, automotive, aviation, food and communications.

In terms of their geographic reach, respondents answered across the board. One in five (20%) said they operate both in Canada and overseas; a similar number (18%) said they operate across Canada. One in three (32%) said locally/regionally and just over one in 10 (12%) said provincially. Not surprisingly, company size also varied greatly. Almost half (47%) work for companies that employ 20 people or less and about a third said their company employs more than 100.

In the broadest terms, security is often regarded as a recession-resistant industry but it has certainly not been exempted from the pandemic.

Across all respondents, 77% said that they have experienced a decrease in business since the pandemic hit in March. That number fluctuates slightly depending on the type of business responding to the question. For example, based on survey results, 82% of integrators, 91% of dealers, 75% of central stations, 86% of distributors and 70% of manufacturers said their business has decreased.

The only serious outlier is guard companies. Seven per cent of respondents identified as guard companies and reported a very different scenario. Only 28.5% of them said they had experienced a reduction in business. While not part of this survey, the demand for guards to help manage grocery stores and other retailers that were open during lockdown, as well as commercial buildings, hospitals and other institutions has been well documented. (For more on this topic, refer to the column written by Winston Stewart, CEO of Wincon Security, in the summer issue of Canadian Security magazine, sister publication to SP&T.)

In terms of the impact across the businesses that said they had experienced a reduction in revenue, 42.5% said their revenue had dropped by 20% or less; 38.75% said the impact was 20-40% of revenue and the remainder (18.75%) said the impact was 50% or more.More than half of respondents (54.5%) indicated that they had laid off or furloughed employees as a direct result of the pandemic. 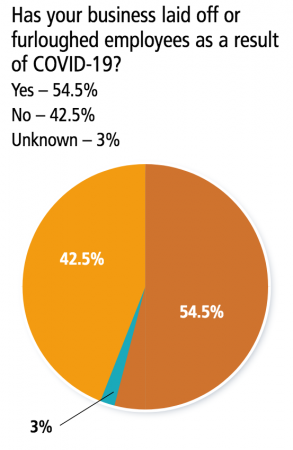 Of those who said yes, 38% said that 10% or fewer of their employees had been affected and 19% said that more than half of their workforce had been laid off or furloughed.

Approximately 57% said they plan to rehire personnel when the economic situation improves. Fourteen per cent said no. The remainder did not know.

While the layoff picture is troubling, some businesses suggest they may be through the worst of it and have been able to hire staff back. Several respondents indicated that their furloughs were already complete — in a few cases, the temporary lay-offs lasted six weeks — and the employees are back at work. Another said they were considering a change to their business model and employing fewer staff overall. One respondent said they had adjusted their employee work-week to four days a week while still keeping the business open five days a week. On a positive note, at least one respondent said that their business was actively growing and they are recruiting for new staff.

The pandemic has resulted in a number of new or modified safety needs which, to a large extent, the security industry has been able to fill.

The majority of respondents (83%) said at least one area of their security business has grown since the pandemic. The most common answers were video surveillance (55%), visitor management/ temperature check stations (44.5%), touchless access control (32.5%) and remote monitoring (29%).

The security industry has also come together as a community to help one another out during these difficult times. More than half of respondents (56.5%) said they had consulted with other security businesses to share best practices. Respondents who indicated in the positive said they had spoken with “industry leaders” or had connected through organized associations and groups such as CANASA.

One of the defining characteristics of the pandemic is the number of people who formerly occupied office spaces and are now working from home. The security industry was declared essential in the early stages of the pandemic, but has still participated in the work from home (WFH) movement on many levels.

A necessary precaution against the spread of COVID-19, WFH has also flourished as a cul-tural movement with some businesses examining the possibility of establishing such programs as a long-term or even permanent solution. Posed the question “Would you consider a permanent work from home program once offices/monitoring facilities are able to operate at full capacity?” approximately 42% said yes, 31% said no and 26% were undecided.Some respondents said they had already established a structured WFH program before the pandemic. Another shared that employees who had been sent home to work during the pandemic missed the dynamics of working in an office environment. For some, administrative positions could feasibly be accomplished from home but others required an on-site presence due to job role requirements.

About a third of respondents (32%) said they would engage in work travel (conferences, seminars, training, etc.) if able, although most said travel would be limited to their province or Canada. Almost the same number (31%) said their company was currently engaged in an employee travel ban and about 36% said they preferred not to travel at this time.

The vast majority of respondents (85%) said they had attended webinars or virtual events since the pandemic. Several respondents also specified that they had engaged in meetings via popular video conferencing and calling apps like Zoom, Microsoft Teams and Skype.