The Southland Park complex towers over the surrounding flat Alberta plains and is situated on 15 acres in southwestern Calgary. Two 12-story structures, one five-story building and a two-story atrium, provide more than 1 million square feet of office and retail space, making it the city’s largest suburban office park. It even has its own light rail station to serve the campus’ 3,000-plus employees. 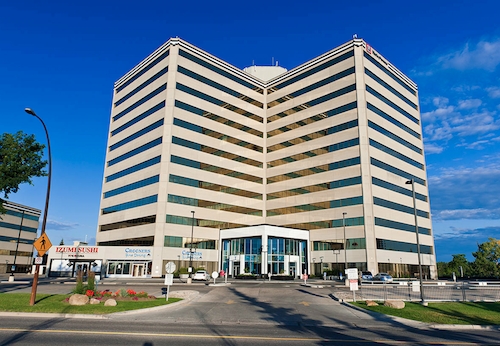 It is like a small city and like any project of its size, there is a frequent need for infrastructure upgrades – including the security systems.

Shortly after arriving as the property manager for Morguard Corp., Helen Lee identified needed upgrades. Security systems, some installed in the 1990s, were beginning to show their age. Wiring was going bad and analogue cameras were delivering low-resolution video. Graffiti was Southland Park’s biggest problem.

“Despite being a large city, Calgary has relatively few problems with crime,” she said. “But our tenants look to us to protect them and we take that responsibility very seriously.”

“It would have been nice to use the existing wiring to save time and money, but the cable was bad and had to be completely replaced with CAT-6 cable,” he said.

Calgary-based Stetson Electric handled the cable replacement. When the job was completed, 12 Aiphone IS Series video intercoms were installed at main public entries and access points into the buildings from Southland Park’s four parking facilities – both underground and above grade – that provide 2,200 spaces.

Each intercom unit is named so security officers know immediately where each call for assistance originates. The intercom system also communicates without the need and expense of standard phone lines. Video and audio data from all units can be monitored from any of the master stations, including those in Southland Park’s security command centre located in the 12-story building known as SL-1.

“The intercoms provide the guards with higher quality information about who enters the buildings and also increases the safety of tenants throughout the complex,” Bilodeau said.

Video from the intercoms is also integrated with the Genetec video system installed at the same time. Delco integrated 59 existing Samsung (now Hanwha) IP cameras into the VMS. Another 21 cameras, including 12 360-degree cameras, were added in common areas such as building lobbies.

Lee said the clear, megapixel video has helped in a number of ways. Slip-and-falls, particularly during icy winters, are common. Yet some campus visitors have not been above filing false reports. Reviews of the recorded video have successfully debunked a number of the claims. Also, a few drivers of tall vehicles run into the overhead parkade entries, backup and drive away. Video has helped identify the vehicles and gain restitution.

“Then our security team uses the cameras to see who’s coming on the property, especially off the rail line,” Lee said. “If someone suspicious is spotted, the guards can go and interview them before we have trouble.”

Also updated with the intercoms and surveillance system was the campus’ access control. Delco installed a Symmetry access system from AMAG Technology that included 24 readers on building exteriors and 115 readers to protect interior office doors. Bilodeau said tenants also use the system for direct access between the buildings and the parkades.

Card readers have been installed in some elevators to control access to certain floors fully occupied by a single tenant.

And Southland Park lays claim to some of Calgary’s most prestigious tenants, including Alberta Health Services, charged with administering the province’s government-run healthcare system, Synovous, an international oil and gas company and Chrysler Canada.

Lee said most tenants determine their own protocols for admitting employees and visitors. But all public entries are locked between 7 p.m. and 7 a.m. Elevators are also locked overnight. Employees may use their access cards, if necessary, to gain entry. Employees can also use the video intercoms to reach the security department. The intercoms allow the officers to remotely unlock doors for known people. Most often that happens when employees forget their access cards.

Guards are also an important part of the overall security plan. During the day, there are typically three guards on duty in the command centre monitoring the intercom, video and access systems. Two other guards patrol the grounds. The other 12-story structure has two guards assigned to it, with another stationed in the five-story building. Five guards are on duty at night. Each is equipped with a radio allowing them to be quickly accessed and dispatched as needed.

Lee praised the upgraded system and the integration work of Delco. As tenants and their needs change, the management team has to be ready to respond quickly.

“This is a living project with many moving parts,” she said. “It’s our job to anticipate, make adjustments and maintain a safe and secure place for our tenants to work.”