The recent name change from the Central Station Alarm Association (CSAA International) to The Monitoring Association was conducted for several key reasons (see p. 10 for more details), but it is one of many changes in nomenclature that security industry professionals have had to adjust to over the years. 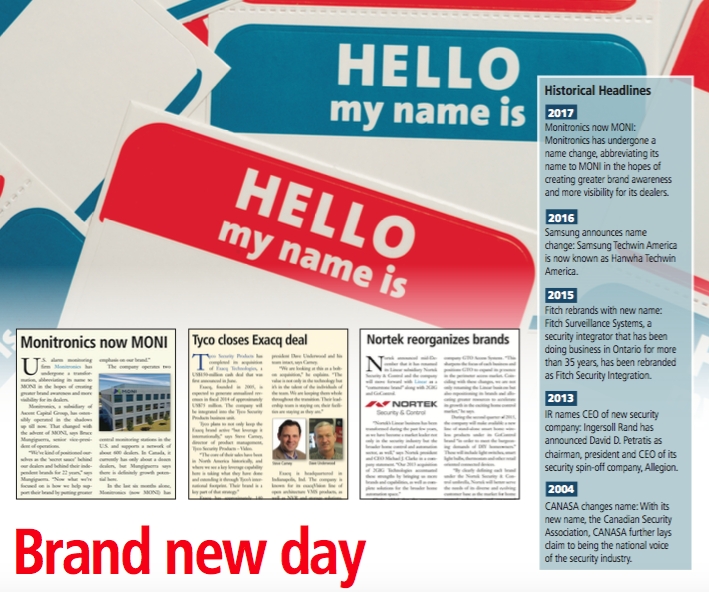 Many of those have come as a result of mergers and acquisitions. Some names simply disappear as one entity subsumes another and moves forward with the dominant corporate shingle. But often the name of an acquired company still holds significant value and is thus retained for its brand recognition. ASSA ABLOY has often pursued this strategy. ASSA ABLOY comprises a multitude of brands, many of which were once standalone companies. The most recognizable of these might be HID Corp. (acquired in 2000), which continues as HID Global. Tyco International has also followed this path, with the acquisition of DSC, Visonic and more recently, Exacq, which was acquired in 2013 when it was more commonly known as Exacq Technologies.

Sometimes a merger might mean a new name, or a combination of the entities that create a new company. DormaKaba is a recent example (the coming together of Swiss Kaba with German Dorma), creating another giant in the world of access control.

In other cases, an entirely new name is given to a familiar entity. When Ingersoll Rand announced it was spinning off its security business in late 2012, there was a great deal of speculation as to what name it would take on. The company later revealed its new moniker would be Allegion, which, according to a press release issued in June 2013, “represents the collaborative, long-term relationships the company forges with customers” and “embodies the company’s team of experts and their relentless commitment to safeguarding people and property.”

Another recent example is Israeli vendor NICE Systems, which sold its physical security business to a private equity firm in 2015. The result was a name change for that division to Qognify.

Back in the realm of associations, CANASA changed its name from the Canadian Alarm and Security Association to the Canadian Security Association in 2004. Former executive director JF Champagne explained in a 2010 SP&T News column that the new name was adopted in recognition of the fact that “its members did more than just alarms.” A similar logic was applied to CSAA’s very recent name change to account for a broader spectrum of monitoring and services.