Total revenues for AlarmForce’s first three months of 2017 were $13.9 million vs. $14.2 million over the same period in 2016, the company has reported, which is also a decrease of 3 per cent (2 per cent in constant currency). 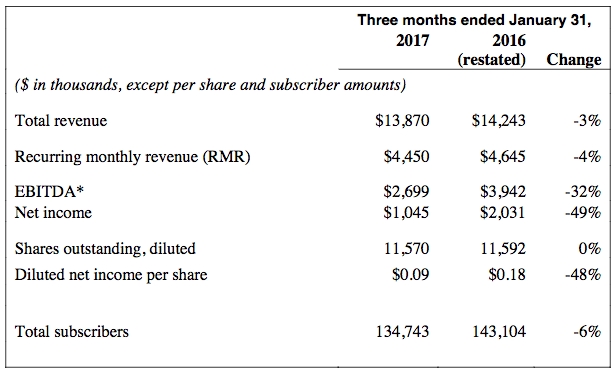 These results were driven by a lower average subscriber base, according to AlarmForce, and the incurrence of one‐time costs related to the consumer contract and employment classification issues totalling $0.9 million. Diluted earnings per share decreased to $0.09 compared to $0.18 in the same period of 2016. Adjusted earnings per share would be $0.15.

“At the end of the first quarter, we completed the review process and adjoining restatements fulfilling our filing requirements,” said Graham Badun, president and CEO of AlarmForce Industries Inc. “Our ongoing efforts to improve the underlying quality of our subscriber base through a focus on the Canadian markets has started to yield encouraging results. This can be seen in our Canadian alarm RMR attrition rate which is less than 5 per cent and the 17.7 per cent increase in average revenue per new Canadian alarm user versus the same period last year. We can now collectively focus our entire team on continuing to improve operations and increasing our subscription base through a number of strategic initiatives including marketing, product innovations and new partnerships.”

In the first three months of the year the company returned $0.5 million to shareholders through dividends paid.