News
Your mobile phone may soon replace your pass card 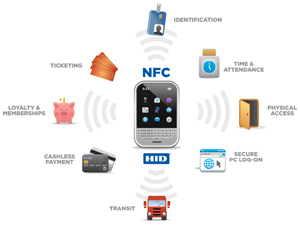 HID Global and INSIDE Contactless, a provider of advanced, open-standard contactless chip technologies, have announced they have extended their partnership to bring iCLASS access control and identity credentials to near-field communications (NFC) mobile phones.

“The ability to support iCLASS virtual credentials within a mobile phone opens the door to a new universe of exciting applications, and this unprecedented capability will be available with the microread NFC controller from INSIDE Contactless,” said Charles Walton, executive vice-president of payments for INSIDE Contactless.  “iCLASS has become a universal identity credential with many applications beyond physical access control, and microread’s unique iCLASS capabilities are a powerful differentiator which we will be able to offer to our mobile handset customers.”

According to Walton, INSIDE is in the process of updating its microread NFC controller to implement the command set and protocol that will allow it to communicate with HID iCLASS readers, and iCLASS support will be a feature of all the company’s future NFC products.  Any mobile phone using INSIDE’s iCLASS-enabled microread NFC controller with an associated secure element will be able to support the use of iCLASS virtual credentials. The iCLASS virtual credentials themselves, as well as the credential management and crypto functions, can be activated and provisioned by HID Global, and will reside in a secure element.

“We’re pleased to be able to extend our partnership with INSIDE because we both realize there is a tremendous opportunity for NFC and iCLASS virtual credentials to transform the corporate mobile phone, one that could even spill over into adjacent markets as the use of iCLASS credentials moves into more consumer-oriented applications,” said Dr Tam Hulusi, senior vice president at HID Global.  “iCLASS-enabled mobile phones can be used just like traditional iCLASS contactless credentials with an HID iCLASS reader, adding new levels of convenience and flexibility, and with added new application features.”

INSIDE has been HID’s exclusive supplier of semiconductor chips for iCLASS credentials since the establishment of their partnership in 2001, elevating INSIDE to the number one global provider of 13.56-MHz contactless chips for physical access control.  In 2007, INSIDE and HID extended their partnership to enable the use of iCLASS technology in the emerging virtual credential market.
Print this page