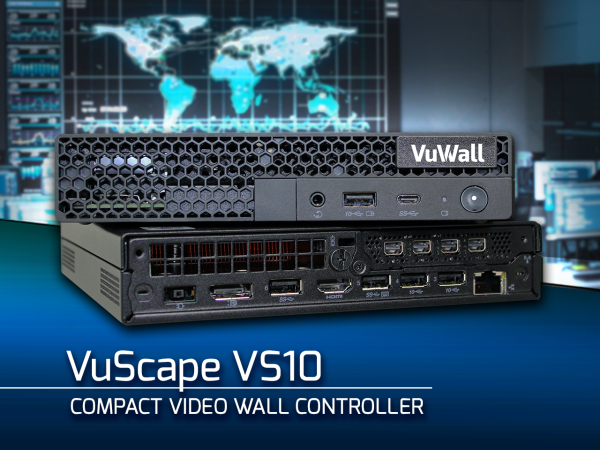 Montreal-based VuWall announced its new VuScape VS10 Video Wall Controller. The compact VS10 is designed for small to medium size video wall deployments, powering up to 16 displays. It can be used as a destination or to capture and manage hybrid AV, IP, and IT sources, including web pages, RSS feeds, VNC, and more, allowing them to be encoded and distributed in an AV-over-IP-only infrastructure.

“As the use cases for video walls have exploded, we’ve responded in equal measure with a flexible and powerful video wall controller that solves the challenges these applications face,” said Paul Vander Plaetse, CEO of VuWall, in a statement. “Whether it’s a smaller deployment needing a robust, yet affordable video controller or a large deployment requiring scalability and redundancy, the VS10 is the perfect visualization solution.”

The VS10 can also be used as a complete video wall processor. It features four 4K outputs, allowing it to be used as a KVM workstation; decode ADDERLink ipeps+; perform VNC network capture; integrate with Milestone and Genetec video management systems; and decode IP cameras, websites, and local applications. The compact form factor allows the VS10 to be installed directly behind displays in scenarios where space is an issue. Easy to install, and with inventory to store, it can be replaced on the fly.