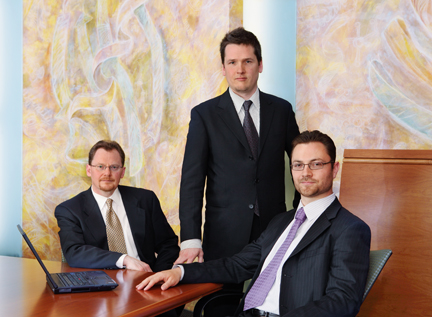 Viion Systems' facial recognition software could easily belong in a 1960s sci-fi film – or a Bond adventure, for that matter. There's definitely something cool about computers that can physically distinguish between authorized and unauthorized users, rather than relying on easy-to-guess passwords.

But coolness alone isn’t the reason behind Viion’s rapid success. Since launching in April 2008, the company’s Sentinel technology has exploded into the IT security space – gaining customers across Canada, the U.S. and Europe. As each day goes by, an increasing number of companies from a variety of verticals – including the banking, healthcare and corporate sectors – are finding new ways to make this type of technology work for them.

That versatility, according to Brett Beranek, vice-president of sales and marketing at Viion, is what allows the company to move beyond the notion of technology for technology’s sake, and fill a real void in the marketplace.

"There are a lot of companies out there that are looking to prevent the wrong people from tapping into confidential information," he says. "Before Sentinel came along, these companies were using the same type of security as residential users."

That type of security typically involved password-protected login screens that would time out if the authorized user left their station for a specified amount of time – typically around 20 minutes. If an individual wanted to grab a cup of coffee or take a washroom break, there would be a significant window for a perpetrator to gain access to unauthorized information.

"We tend to think fraudulent masterminds are the only individuals who hack into computers," says Beranek. "In reality, it’s the guy three cubicles down from you."

Viion’s Sentinel software uses over a dozen algorithms that allow it to distinguish an individual’s facial features. Via web cameras, it tracks an individual’s eyes, nose, skin tone, and overall facial image, among other features, so that the individual’s entire face doesn’t have to be completely in view for the computer to accurately identify it.

Viion president, Michael Kelly, had established the basics of this facial recognition technology back in the 1990s, but the existing infrastructure wasn’t advanced enough to bring a commercial solution to the marketplace. After killing some time with other company launches – including an analytics technology company that specialized in licence plate recognition – he decided the time was finally right in 2008, due in large part to the advancement of web cameras. He partnered with David McMordie, now Viion’s chief technology officer, and developed the solution.

"Webcam technology has developed a lot in recent years. The cameras we use with our software aren’t specialized in any way – they’re regular cameras that you can pick up at Best Buy," says Beranek. "Once you install the camera and the software, you’re pretty much done. It’s a fairly simple solution to deploy."

Sentinel’s ease-of-use and affordable price structure are essentially what set it apart from the traditional facial recognition technology you see in the physical security realm. While a physical security facial recognition system would typically require powerful servers and customized solutions, resulting in tens of thousands of dollars, Sentinel is a good fit for IT security applications because it costs significantly less – between $100 and $200 per computer.

This means virtually any company can afford this advanced form of security. The majority of Viion’s customers use the program to ensure only authorized users are accessing specific information through its Sentinel Sign-off program. In the banking sector, this helps reduce various types of fraud – including identity theft. In the healthcare sector, it works to ensure patient records are kept private.

Viion’s technology has also been used in industrial settings, through Sentinel Machine. This program ensures only qualified workers are utilizing specialized, and potentially dangerous, machinery. In a nuclear reactor facility in Europe, for example, Sentinel Machine was programmed to sound an alarm if an authorized worker left his or her post or, similarly, if an unauthorized worker found his way in front of a dangerous piece of machinery.

Even Human Resources departments are reaping the benefits of facial recognition technology. One of Viion’s customers, a Montreal-based call centre, was using an outdated time card system to manage payroll. This system was exploited by many employees – after they clocked in, they would spend a large amount of time chatting around the water cooler rather than working the phones. Because they were being paid an hourly rate, it was difficult for the company to distinguish the amount of ‘work’ hours from the recreational ones, and it was losing a lot of money as a result.

Viion’s Sentinel Time Track solution solved the problem – much to the chagrin of the less-motivated workers. Employees at the centre are now paid according to the amount of time they spend working in front of the computer.

"Employees that had these behavioural issues definitely had problems with the new system," says Beranek. "But the top performers definitely appreciated it – as did the managers and HR department."

Finding solutions to everyday problems is the fuel behind Viion’s growth – and the company believes it’s just beginning to hit its stride. With client partnerships pending in the Middle East and Asia and plans to extend its solutions to the physical security realm by the end of 2010, things are looking good.

"As every month goes by, a new market or application seems to pop up," says Beranek. "We really saw this as simply an IT security solution at first. After bringing it to market, and noticing the demand, we’ve had to evolve our thinking."