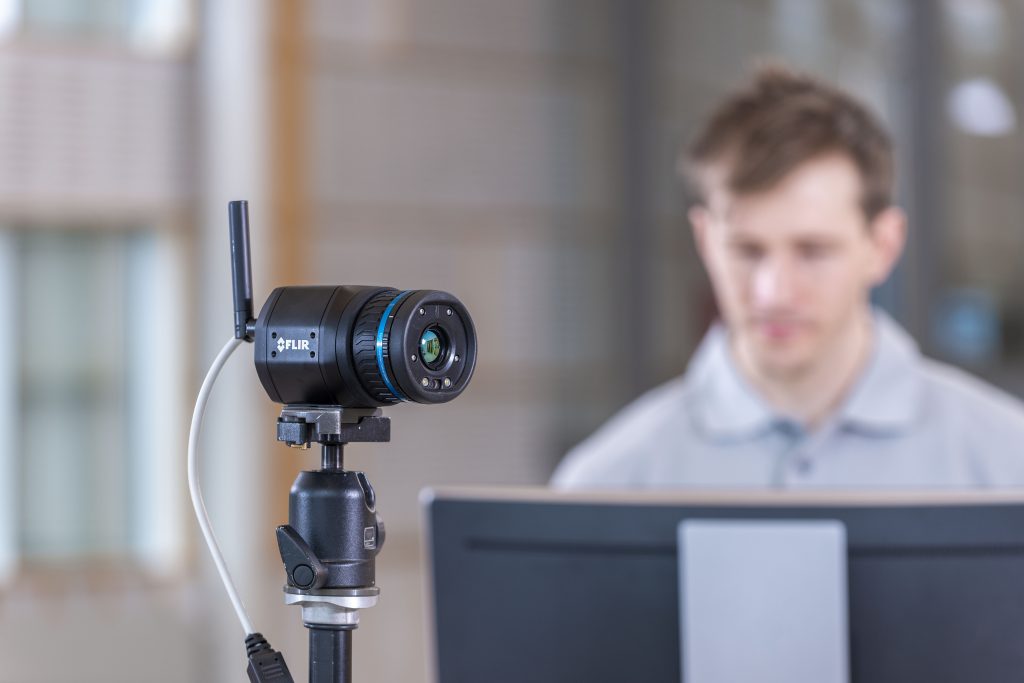 In a world that now requires people to social distance and monitor their temperature, thermal solutions have become a technology staple.

Dave Bursell, vice-president of business development and product management at FLIR, says that the company has seen an exponential increase in demand for their thermal temperature solutions. “It’s really hard to say what that new normal will look like, but this much we do know — this technology will be a part of it,” Bursell says. “We’re preparing for that and making sure that we can meet the needs of the different workplaces.”

“The thermal imaging has a software on the camera itself called Screen ESP mode which enables that portable handheld camera to do screening, and it has auto detection,” Bursell explains. If the temperature of the skin is above average, then the individual may be selected for additional screening. Bursell says that identifying individuals with elevated body temperature can help reduce or dramatically slow the spread of viruses and infections.

“We introduce things like facial detection, which is detecting that there’s a face there, and then we can really concentrate the measurement on the corner of the eye,” Bursell explains. “Research has shown that that’s the best place to relate skin temperature to core body temperature.”

Bursell notes that FLIR’s thermal temperature solution technologies have seen substantial acceleration in sectors such as manufacturing and warehousing facilities, as well as distribution centres and “essentially any place where you have people gathering and coming to work, and you have a fairly large population of workers.

“We are seeing the technology being utilized now as a pre-screening method, again to ensure worker safety and health,” Bursell adds.

Another sector that has recently begun to utilize thermal temperature technologies is airports. Back in June, the Government of Canada announced that temperature screenings are mandatory for all passengers on international or transborder flights travelling to Canada prior to boarding at their point of departure.

It is not just passengers who will have to be screened — it was also announced that all employees and personnel that enter or work in the restricted area of the airport and screened through a Canadian Air Transport Security Authority point will be subject to temperature screening procedures by CATSA personnel.

According to an official statement from Transport Canada, a phased approach has been taken in order to implement temperature screening. The approach is as follows:

Phase 1: On July 9, all air operators were required to conduct temperature screenings of all passengers travelling to Canada prior to departure from international or transborder points of departure.

Phase 2: On July 30, temperature screening stations were placed in the departure section of the four major airports that are currently identified for international travel (Montreal, Toronto, Calgary, Vancouver).

“Temperature screening can be conducted with a variety of technologies, from handheld digital infrared thermometers to sophisticated contactless thermal camera-based systems that can automatically screen a high volume of travellers in queues and manage any privacy concerns,” Transport Canada said in a prepared statement. “The implementation of measures would not prescribe a single type of equipment to use.”

A representative from Transport Canada also shared that they have established technology performance standards for equipment that adheres to industry standards. This approach was taken to ensure that the thermal temperature equipment should operate as expected during temperature screening for accuracy, according to the statement.

When Toyota Motor Manufacturing Canada Inc. (TMMC) began preparation for the reopening of its Cambridge and Wood-stock, Ont. plants, the automaker sought the help of a number of vendors, including GHD, a global engineering firm based in Waterloo, Ont., for recommended thermal temperature solutions.

“I don’t know any other manufacturer or business that has taken the full scale approach that Toyota has taken,” says GHD vice-president Jason Haelzle. “They move mountains to make sure that their staff and team members are safe.”

Haelzle shares that just 11 hours after GHD had an initial meeting with TMMC, his team had to deploy to the site for a pilot of Hikvision temperature thermal screening monitors. “It was quite impressive to see the resources that are deployed, and the rapid response that Toyota did,” Haelzle says.

TMMC employees are now mandated to fill out a daily questionnaire to determine if anything from a health perspective has changed. Once the questionnaire is completed, each person’s temperature is checked using thermal cameras, which has a high throughput, according to Haelzle. “If there’s a high-level alert, it triggers and makes a sound so that you are aware of it,” Haelzle explains. “Then you can pull the individual aside for a secondary screening questionnaire.”

Looking ahead at the new normal, Haelzle believes that as more and more businesses start to reopen, thermal temperature screening solutions will be a popular solution. He notes that businesses in other sectors have also implemented similar technology.

“Some businesses are having employees do it, whether it’s at home on their own and they can register their own data,” says Haelzle. “There are probably 50 cameras at different businesses that have been sold and more cameras are going in continuously.”

While thermal temperature technologies have played an essential role in the country’s reopening, Bursell stresses that thermal imaging technology does not explicitly detect COVID-19 and urges the public to continue to remain vigilant and practice good hygiene and social distancing.

“All thermal imaging can do is detect an elevated skin temperature. Keeping that in mind and understanding that is important to be clear,” Bursell stresses.

“We want to make sure that that message is clear that [thermal imaging] does not detect a virus or a fever.”

While Haelzle also agrees that thermal temperature technologies are not the sole solution to dealing with COVID-19, he believes that they do contribute in a meaningful way, and will continue to do so as the province slowly reopens.