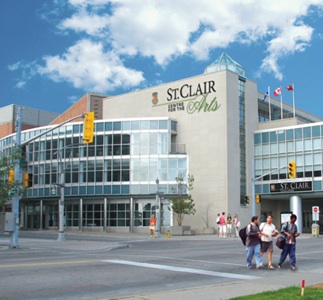 A Windsor college has learned how to send emergency security alerts to thousands of students spread over four campuses in two cities by tying the PA to the fire alarm system.

St. Clair College of Applied Arts and Technology has three campuses in Windsor and a fourth on the other side of Lake St. Clair, in Chatham-Kent. While growth has been a feature of the school since its founding in 1966, expansion really took off in 2007, when the school began to renovate, build new buildings and even buy old ones.

But all that growth left the college’s various campuses with vastly different fire alarm systems, ranging from the completely obsolete to the most up-to-date — five years ago, they did a major upgrade to the alarm system in the main, or south, campus. The new system, Honeywell’s NOTIFIER, gave them the ability to pinpoint the location of an alarm and to broadcast emergency messages throughout the campus’s buildings.

Since then, they have been working on the other campuses, replacing alarm systems in the older buildings, installing them in the new ones and then integrating them into the existing network.

“Every time we upgrade, we have go out for a quote on it. And when we do that, NOTIFIER has got the job because it has the capabilities we want,” said Rebecca Demchuk, manager of occupational health and safety, a position that includes security.

The centre of the system is the ONYXWorks workstation, a monitor that displays the exact location of an emergency. Detailed maps of every building are stored in the station. When there’s an event, a panel displays in text form where it’s happening, while the screen pulls up a map indicating where on the layout the alarm is coming from.

“Let’s say it‘s coming from a pull station in a corridor,” Demchuk explains. “Well, this is a huge facility, and that’s difficult to find unless you know exactly where it is. So, the screen will show you the layout, and then you can see exactly which corridor it’s in and what room it’s near. There’s no guesswork involved. And you know exactly what the fire condition is.”

With all buildings integrated into a single network, she can see the location of an alarm no matter where across the college it goes off. After the college’s Mediaplex, a former Salvation Army building, opened last year, complete with a new system, Demchuk, said, they had three different systems in three campuses. “And they didn’t talk to each other. Now it’s all one. They can talk to each, and I know what’s going on everywhere.”

A key feature of the new system is a digital voice communication capability. The old system used pre-recorded microchips, so staff were limited in what messages they could send, says Al Bastien, sales and service at Vipond, the Mississauga, Ont.-based supplier. They could, for example, page certain “blocks” (an entire, or wing of, a building), and they could evacuate some blocks. But the system did not give them the ability to give different directions to students in different blocks at the same time.

So, it gives you great flexibility to control the movement of the students, or in a given situation, to handle how it’s going to happen,” he said.

Demchuk said the school can now broadcast all emergencies through the digital system — anything from severe weather alerts to bomb threats.

“So every building on this campus I can communicate with. That’s a huge benefit in announcing lockdown drills or tornadoes,” she said. “If we had an active shooter on site or somebody with a gun, that’s when we would announce that.”


Also connected on the network is a distress button for faculty and front-line administrative employees. Registration staff may think a student is getting aggressive, or an abusive partner may show up in an instructor’s office. The person presses the button on their desk, and an alert appears on the ONYX work screen.

“That’s on the fire alarm system. Security gets a pop-up on the screen, as well as a graphical location of where that button was pressed. So they know where to dispatch to,” Bastien says.

Before the successive upgrades, the college’s buildings had a mix of one- and two-stage fire alarm systems. At the single-stage alarm facilities, every alarm meant the building was evacuated. Then, about five years ago, the fire department insisted that all buildings have the same system. And the college, because of the number of students concerned, also wanted to reduce the number of times nuisance alarms forced evacuations.

With the new system, when an alarm is triggered, either manually at a pull station or because of a smoke detector, students first hear an alert tone and a message to stand by; the fire is being investigated, Demchuk says. If it’s a false alarm, they can stop it. If there is a fire, they put the alarm into second stage.

As well as being able to stop a false alarm after the first alert, they can also prevent one when they think some activity, such as electrical work, might set an alarm device off. The system lets them disable specific areas. “With the older systems, you had to disable the whole zone or disable your whole fire alarm system. Now we can get it right down to a smoke detector,” Demchuk said.

The college has several hundred cameras on all campuses together, and in the last few years, it has been upgrading the old analogue ones, as well as adding new IP ones, all Pelco PoE PTZ IP. They have also recently put in an Endura network DVR, Demchuk says.

“It’s a constant evolution. We are always replacing or putting in new cameras in areas we deem necessary. But they’re a budget issue, so we go as we can,” she said, adding the fire system and cameras work together.

“The fire alarm helps you identify the exact location, so you can go to your camera system and see exactly what’s going on. Which is great, especially if it’s at another campus and it’s in the middle of the night,” she said.

Apart from replacing cameras, there’s still a bit of work left to go, Demchuk said. This month, they are starting to complete the upgrade at the college’s Centre for the Arts at the downtown Windsor campus. It’s the only building not yet linked to the voice communication system.