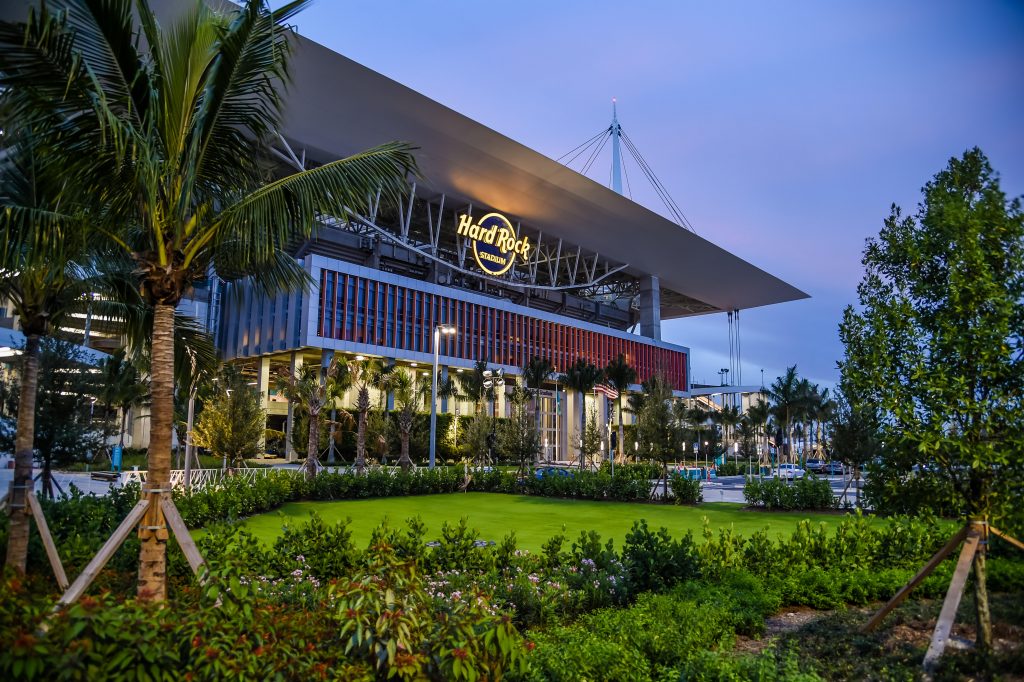 Sports bring people together. A lot of people.

Stadiums and arenas take in thousands of spectators every time there is a sporting event or a concert, and controlling where they can and cannot go, keeping track of individual behaviour, and ensuring they don’t bring dangerous items past the gates are difficult undertakings — next to impossible today without the smart use of technology.

Jason Simpson, manager, corporate risk services for G4S Canada, says the security operations centre is “the beating heart of the security program that runs any sort of massive event space like a stadium…and you’re going to have everything flowing through that.” He continues, “Your people on the ground are going to be integrated with the command centre and issue commands about where to go or what to do or what’s happening.”

One of the firm’s most notable projects was their involvement in the renovation of Hard Rock Stadium in Miami, home to the National Football League’s Dolphins and the University of Miami football team, the Hurricanes.

Simpson says of the project, “The hub of the solution is the G4S security command centre, where all the trained personnel maintain eyeballs inside and outside of the stadium to be able to respond quickly and efficiently to any incidents.”

G4S says it helped build the new security operations centre for the venue, from initial design to cabling infrastructure, as well as ensuring the capabilities of the server worked in conjunction with the camera system installed. G4S partnered with camera manufacturer Avigilon to provide video management software and 829 cameras for the stadium and an accompanying training facility. “There is the very high resolution surveillance system now that covers the facility, the parking areas, the perimeter,” Simpson says.

Eyes on the crowd

Edmonton’s Commonwealth Stadium is home of the Canadian Football League’s Eskimos — called “The Brick Field at Commonwealth Stadium” during Eskimos games and team events — and it is a venue that relies heavily on surveillance technology as well. To keep track of what’s going on in every corner of the sprawling 56,400 seat venue, roughly 150 high-definition CCTV cameras are utilized.

Jason Fesyk, events supervisor for Commonwealth Stadium, says, “It’s really helpful to have the CCTV cameras. We utilize them for a lot of monitoring of specific areas, areas where we know that there’s going to be congestion, areas that we know have high traffic volumes. That way we have a firsthand look at what’s going on there, and we’re able to deploy our resources, be it our usher teams, our security teams, and even Edmonton Police Service, to areas when we need to.”

However, given that Commonwealth is an outdoor stadium, ensuring that cameras are able to capture what’s happening clearly in all lighting conditions can be tough. Fesyk says, “It becomes a lot more of a challenge with the sun setting in the west. A lot of the cameras along that side need to be strategically placed so that when the sun is going down or at the highest point of the day, we’re able to still get quality views from those areas.” He continues, “Our group of security electricians that help us to install and get these cameras into the right positions do a really great job of making sure that we’re putting the cameras in the place where they’re the most valuable for us, that will allow us to use the full extent of the camera and not be blocked out by bad angles or dark corners.”

Fesyk says artificial lighting, both in open air and indoor areas, is also crucial to ensuring cameras are capturing clear footage. “We’ve moved a lot of our lighting over to LED lighting, in the concourses and in our food service areas so that we have the best available vision with those cameras either during the day or at an evening event,” he says. Fesyk explains that LED lighting “helps us with bridging that gap from natural light to our covered-in areas. It’s easier to pick up and detect when the light is a little bit more consistent.”

Beyond adjusting to shifting lighting conditions, G4S’s Simpson says another potential issue facing outdoor stadiums is dealing with drones. “How people are able to mitigate those drone incursions and what they can do might be as simple as a network of wire mesh that nothing can pass through.” He continues, “The technology to stop the drones isn’t necessarily widely available or invented yet…You can’t cut a wireless signal, you can’t cut a radio signal without messing up other stuff. Drones bring a ton of unique and creative security challenges.”

Detecting danger at the door

While flying robots buzzing through a football field might provide headaches for security, what really keeps these professionals up at night is the prospect of weapons entering their facilities. In the age of mass shootings, weapons detection at large event venues has become a focal point for security.

Kevin Kempcke, director of security for Maple Leaf Sports & Entertainment (MLSE), is in charge of two marquee sports stadiums in downtown Toronto: Scotiabank Arena, the home of the Maple Leafs and the Raptors; and BMO Field, where Toronto FC and the CFL’s Argonauts play. He says walk-through detectors, mandated by the National Hockey League in 2015, made an immediate impact. “When we first introduced metal detectors we were catching approximately 50 knives a game from people coming in,” he says, noting the detectors provide a quicker throughput of guests as well.

Kempcke further explains that since initial introduction of metal detectors, guests have shifted their behaviour. He says, “People would carry swiss army knives, utility knives, box cutters. But once metal detection started to be implemented, people changed their ways and said, ‘I can’t bring my Swiss Army knife to the game anymore.’”

Kempcke does acknowledge that metal detectors aren’t perfect, as they are tripped by benign items like keys and cell phones. He says, “But there’s new technologies and we’ve been looking at them — technologies that won’t detect cell phones or keys and it’s only going to hit knives and guns.”

Liberty Defense Technologies, a Vancouver-based firm, is working to bring such a technology to market, which it licensed from the Massachusetts Institute of Technology.

The firm’s CEO, Bill Riker, says his weapons detection system, called Hexwave, uses three-dimensional radar imaging to create images of objects on individuals’ bodies, and those images are analyzed by artificial intelligence to determine if they are benign, or in fact, knives or guns or bombs. He says the system can also pick out objects like bottles of alcohol, and it works for both metallic and non-metallic items.

Riker explains further that the system’s panels send out low-power radio frequency signals, and that energy hits objects and generates 3D maps that are then received by the same panels. That’s when the AI-powered analytics go to work to determine what an object is and where it is on a person’s body. Riker says, “We teach the algorithm what all the target objects look like, and it’s that algorithm that resides in each of the units that enables us to do the real-time threat determinations. So it’s the algorithm taking a look at this image and saying, ‘Ah, that’s a handgun, that’s a set of keys, or that’s something else’…And we teach the algorithm what an object looks like at all different angles.”

All computing is done within the units themselves, and according to Riker, quickly. “When I say real-time, it’s actually doing the detection and the analysis in roughly 0.2 seconds, and that’s a constant update, like a video rate almost.”

The CEO touts the system’s versatility, saying it can be deployed overtly or covertly—behind walls or in kiosks or vestibules. It works both inside or outside, and it can integrate into existing systems like video management, access control or a security operations centre, and detection can be set up to trigger locking doors, queuing up cameras or communication with the stadium’s central hub. The system can also be manned by guards with tablets.

Riker says the system makes security teams more agile. “Right now you’ve got a bunch of dumb stations out there. Something goes wrong, you’ve got to get on the walkie talkie. There’s a latency in detection and action. What we’re finding as we talk to venues, is they want to have everything connected, fast.”

Riker imagines a future when these machines will replace metal detectors as the weapons detection standard. He says, “The breadth of this capability enables us to be able to do something that metal detectors are limited in…The threats are evolving beyond metallic threats, plastic handguns, for example, explosives, those are things that are going to require a different detection capability.”

The system is already garnering interest from large sports venues, as the firm is scheduled to enter beta testing with Rogers Arena, home of the Vancouver Canucks, in 2020, and the home of one of Europe’s most storied soccer franchises, FC Bayern Munich, shortly after.

In addition to keeping weapons and contraband out, controlling where people can go once they’re in a stadium needs to be paid careful attention, especially ensuring that athletes and musicians have unfettered access to their private spaces and the general public is kept out.

Fesyk says at Commonwealth, “we do have a card system that we utilize for the majority of the doors in the building. You need to have either a team provided pass or a city provided pass, to get access to certain areas….All of our stadium passes all have privileges and zones, as well as a photo and a name for the individual and who they work with.” He continues, “Depending on who you are and where you need to get to will determine which areas of the stadium you’re going to get access to and when, because things do change from our regular day-to-day to our event operations when we have a football game or a large concert.”

MLSE has moved away from cards, since at their properties, biometric readers have been used for about a decade. Kempcke says for busy athletes who need quick access to multiple areas of the facilities, the bio-readers make more sense than proxy cards. He says, “Now players just scan their finger and they get in to access their locker room or wherever their destination,” explaining further that eliminating the need for proxy cards eliminates the scenario where a player will forget their card and leave a door propped open. “We never want to see doors propped.”

For Kempcke, leveraging technology is a huge help to his operations, but keeping up with changing trends can be a challenge. “You think you put in the new system, the latest and greatest with all the bells and whistles and two months later there’s something brand new on the market and its ‘Oh, I want that new toy.’” He continues, “We go to technology trade shows every year to stay current and see what’s out there, look at what’s an investment that makes sense.”

MLSE is just about to start a three-year plan to upgrade its CCTV, security operations centre and analytics program.

However, Kempcke cautions that technology is only as good as the people using it. He says, “You can have an X-ray machine, and if staff don’t know what they’re looking for or how to use the machine, then the machine is as good as it being off.” He says the key is “educating staff, so they know the maximum use of that technology and how they can benefit from it and create a safe environment for all attending.”

This story was featured in the August/September 2019 edition of SP&T News magazine.