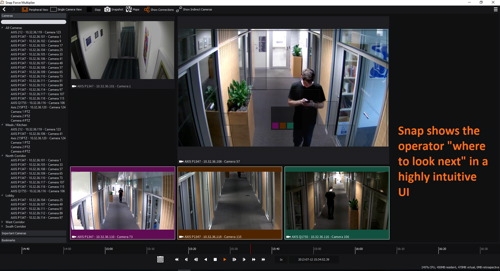 Snap says its User Interface (UI) software allows customers to get more effective use from their medium-to-large (100+ camera) networks as it automatically finds relationships between the camera fields of view; both overlap and near overlap. It then presents the camera network to the user in a variety of ways that reduce information overload.

Snap uses video analytics on individual video streams as a pre-processing step (to determine scene occupancy), then processes the occupancy signals from across the camera network in concert to determine the inter-camera relationships. As such, Snap says it is what could be called “multi-camera analytics”, whereas the majority of existing analytics process single cameras in isolation.

This certification distinction indicates that the solution has been certified with the Milestone XProtect Platform (products from 2014 onward), Milestone says, adding that the certification focuses on testing the solution’s functionality, performance impact and usability.

“As a relatively new entrant into the global security sector, Snap draws significant value from working with a market leader in Milestone, and being an active partner within the Milestone Open Community,” says Simon Langsford, CEO, Snap Surveillance.