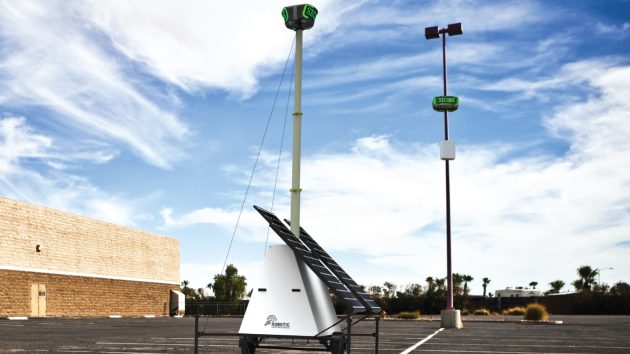 Robotic Assistance Devices (RAD) has introduced RIO (ROSA Independent Observatory), which consists of a single ROSA 3.1 unit mounted atop a solar-powered portable trailer, with the option of adding a second ROSA unit.

RIO has been designed with portability and round-the-clock performance in mind. At its base stands a ruggedized portable trailer positioning the unit’s two solar panels and housing the device’s high-performance batteries and control systems. RIO’s retractable mast extends nearly 20’ where a single ROSA is mounted providing an ideally positioned 180° field of view. To achieve a 360° field of view, a ROSA-Expander unit is also available.

“RIO is poised to be a game-changer at big-box retailers, construction sites, hospital campuses, entertainment venues and so many more vertical markets,” said Steve Reinharz, CEO of AITX and RAD, in a statement.

“The RAD dealer channel is excited about RIO,” added Mark Folmer, president at RAD. “RIO gives RAD dealers a lower-cost, higher-margin, higher-volume solution to offer their clients. We privately introduced RIO to our network of dealers and have received overwhelming interest, plus we’re actively booking pre-orders. We expect the security industry’s response to be even greater when we officially present RIO at GSX in two weeks.”

RAD will be exhibiting in booth #1650 at GSX in Atlanta at the Georgia World Congress Center, September 12-14.