For each of the last several years, SP&T News’ January cover story has focused on predictions and prevailing trends for the year ahead. 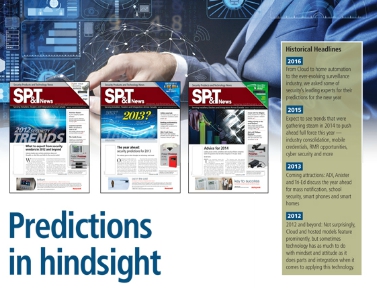 This year is no different, with emphasis on drones and the ubiquitous concerns about cyber security.

Drones, arguably, are still in their infancy in the security industry. That may well change in short order, but cyber security worries have been brewing for a while now. While some of the cyber gaps have been linked to equipment that is incorrectly installed on the network (default passwords not changed, etc.), in other cases it comes down to underdeveloped skillsets and a lack of training. In the January 2016 predictions article, Kevin Lonergan, IDC Canada analyst, said, “Organizations are saying that, despite email being 25 years old and people being on the Internet for 20 years, people are still falling for simple phishing scams.”

While that may indicate a poor IT IQ in the general populous, the IT skills gap in the security community itself has been mentioned several times over the years. Back in the January 2012 issue, Jay Hauhn, then CTO of ADT Commercial Security, said, “Integrators who felt a threshold was crossed when learning about IP through cameras will need to step up their game in the coming year because deploying Cloud-based and managed services will require knowledge and expertise on par with learning IT in the first place.”

Another trend that has echoed through recent years is the public’s demand for smarter devices and the security industry’s desire to keep up. In 2012, Scott Harkins, president of Honeywell Security Products, said, “The fact of the matter is that, even though the vast majority of consumers own these devices, the security industry is just scratching the surface when it comes to applying this technology.”

A few years later in 2014, Allegion’s Rick White said, “Security will always be a key driver, by definition, but users will expect similar experiences from our products and systems as they see from consumer electronic products.”

The security industry, like any other, will continue to experience the pull of consumer demand, the unpredictable nature of technology trends and the need to keep skills sharp to make sense of it all.

Stay tuned for our 2018 predictions….