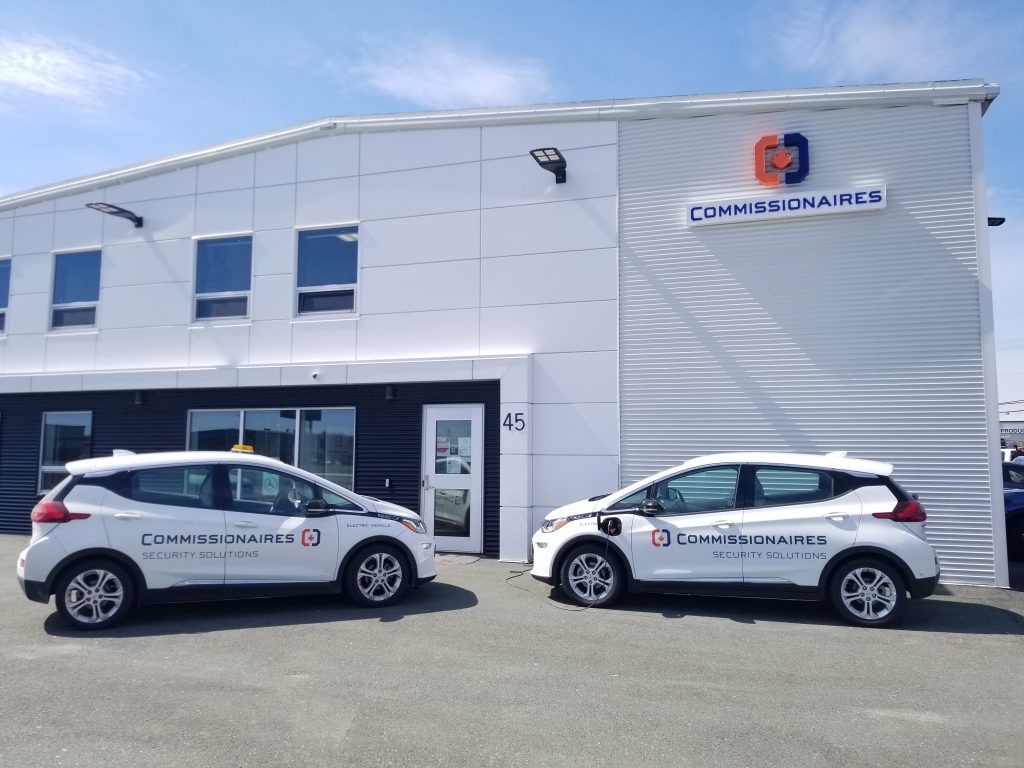 With electric vehicles (EVs) and fleets expected to be mandated in the coming years, security companies are already turning to electrification.

In the summer of 2020, Cancom Security Services made a fleet purchase specifically for the company’s alarm response and control services in the Greater Toronto Area (GTA). Paul Baziuk, Cancom’s vice-president of sales, shares that the fleet was a necessary purchase.

“We had some gas vehicles that were high mileage, and they were getting expensive to repair and keep on the road,” Baziuk says. “Our CEO made a tough decision to invest the capital in four Tesla Model 3s last June, and we put those on the road immediately.

“Hand-in-hand with that we installed three Tesla high power wall chargers at our office, so that during downtimes and shift changes, the cars could just charge.”

Baziuk adds that if the company needs faster charging, their drivers can go to one of the Tesla superchargers that are scattered across Toronto, which includes the Cadillac Fairview properties “where we can add miles fairly quickly — you can charge 80 per cent of the battery’s capacity at the superchargers within 20 minutes.”

Commissionaires Newfoundland and Labrador purchased its first Chevy Bolt EV back in 2019. According to CEO George Forward, the purchase was done to not only demonstrate their ISO 14001 commitments, but also to make a statement.

“Newfoundland is an oil producing region with a long tradition of extracting raw resources for economic gain, but we are also populated by a people who, more than most, value their environment,” Forward says. “We wanted to tackle this dichotomy of values by showcasing to our clients and the community that we do what we have to do, but we can do it cleaner.”

Security companies can reap the benefits of transitioning to electric fleets from a cost and efficiency standpoint.

Amanda Kung, research analyst, Parks Associates, says that the growing EV market, rise in consumer interest in sustainability, and the U.S. Department of Energy’s investments to reduce carbon emissions, are all topics of consideration for security companies that are considering a transition to their patrol fleets.

“The addition of EVs can help reduce costs with less maintenance and no fuel expenses and attain corporate sustainability goals,” Kung explained in an emailed statement.

“Although companies may be concerned with long distance usage, current average EV ranges are good for local usage in well-defined areas, such as neighbourhood security patrol units.”

Bryan Jones, business development manager, intelligent building solutions, Graybar Canada, says that interest in EV solutions has been high amongst customers, whether they work in security or not.

“I’m fielding somewhere between two to three inquiries per day on charging stations, which tells me that there’s interest in providing these kinds of solutions for their employees,” Jones says. “The first year of offering, we sold $10,000 worth of EV related equipment. Last year we sold a million, and this year we’re already on track for two million.”

Prior to joining Graybar, Jones had his own security business with 78 technicians on the road. Jones says that whenever his technicians would come to him regarding issues with their gas vehicles, it would cost money to do the repairs and ultimately would result in him losing time on projects.

For this reason, Jones feels that security companies would benefit from investing in EV fleets.

Jones adds that when security companies in- vest in electric fleets “those costs are gone; you no longer have to account for people’s per kilometer and having them keep a log for CRA…it’s a cost that is effectively eliminated.”

With 18 cars in their fleet in Toronto, Baziuk shares that Cancom’s decision to invest in the Tesla Model 3s was ultimately because the company wanted lower operating costs, which he describes as being the “No. 1” positive result since making the electric switch.

“If you removed the gas expense alone, which is huge in itself, that’s pretty significant. Then you remove the fact that the vehicle no longer needs oil changes, that’s also significant. And then you look at the other things: it has no exhaust and the brake system lasts longer because of regenerative braking these cars when they slow down. Those are some pretty, pretty significant things. We did a lot of research.”

While Forward agrees with Baziuk that the switch to electrification has been economically smart and sustainable for Commissionaires, he notes, however, that EVs are only feasible in the greater St. John’s area.

“Charging stations and their scarcity are such that outside of the Avalon Peninsula and certainly away from the Trans-Canada Highway, there are few options to quickly charge to ensure a workable turnaround to get the vehicle back on patrol,” Forward explains. “Certainly, this will be addressed in time as more and more charging stations are established but for now, we are con- strained by a lack of infrastructure.”

Forward also adds that the other obstacles Commissionaires is facing with full fleet electrification are options and cold weather dependability.

Currently, there are few options on the market in Newfoundland other than e-sedans in certain sites, because of role, function and road conditions, Forward explains. “We need high-clearance vehicles with a towing capability. This means a large pick-up and while hybrids are emerging, we may have a wait before we see electric pick-ups,” Forward says.

“We have sites in Labrador and batteries do not fare well in minus 40. Again, that is changing so as time goes on, we hope to get access to more robust, dependable and powerful EVs, but in the meantime, we are bound to the internal combustion engine for a while yet.”

Back in April, Prime Minister Justin Trudeau promised to slash Canada’s greenhouse gas emissions by 40 to 45 per cent over the next nine years. Similarly, U.S. President Joe Biden recently announced his commitment to electrification in 2030.

With this push for automotive manufacturers to make the switch to electric vehicles, it seems all but inevitable that more and more security companies will see their fleets become electric in the near future.

Baziuk shares that Cancom has received such positive feedback from staff and clients about their Tesla Model 3s that the company is considering more purchases in the future to replace the remaining gas cars that remain in their fleet.

“We will make that change over the next 12 to 24 months because of the cap costs on the specific Tesla Model 3,” Baziuk says. “There’s other electric vehicles out there but the Model 3 we will standardize on for Ontario, and out West, which we have expanded to. And it just makes sense, because of where the market’s going, the operating cost reduction.”

Concludes Baziuk: “We like the vehicle — we’re happy with it. We’ve had zero issues, and we are just over 40,000 kilometres on each of those vehicles, so far.”

Forward agrees that the industry will continue to move towards electrification, especially as the vehicles evolve, and provide better and cheaper options.

“Running vehicle fleets is exorbitantly expensive — [having electric fleets] saves money. This appeals to clients and this also satisfies a social contract. And I think we’re not going to have a choice, as this will eventually be legislative,” Forward concludes. “It’s a no-brainer.”