New research by Parks Associates shows that new and more economical DIY systems from key players, including Nest, Ring, Samsung and ADT, are part of a vital step in expanding the security market. The research firm also notes that new smart DIY solutions will reinvigorate adoption of home security, particularly among younger consumers. 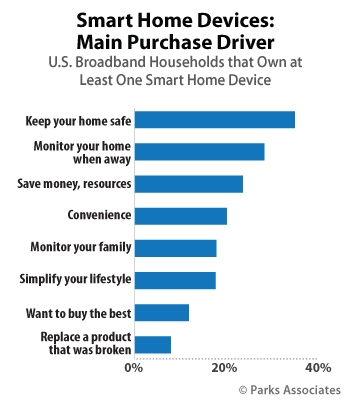 U.S. broadband households that own at least one smart home device

“Consumers value security and safety use cases, but the security market has struggled to move beyond the traditional 20 per cent penetration level in the U.S.,” said Brad Russell, research director, connected home, Parks Associates. “Aggressive moves by companies such as Ring, which launched its inexpensive Ring Protect DIY home security system in October, will help attract new and younger consumers into the security market. Ring’s pricing strategy also puts downward pressure on other players to lower prices.”

“Samsung and ADT have joined forces for the ADT Home Security Starter Kit, which expands the self-installable DIY segment,” Russell added. “Meanwhile, hub-based security systems are an intentional strategy to stake out a controller position in the home for a variety of future device and service offerings.”