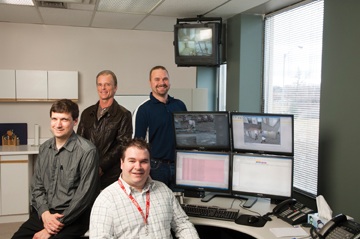 When Thomas Smetana became fed up with the quality of service he was receiving from monitoring stations, he decided the only way to get what he wanted was to build it himself.

Central Station Security Services in Ottawa is a third-party monitoring centre owned by Smetana, his brother Dave and four other dealers, who all have shares in the company. The company has been in business for the last five years and recently became ULC-listed.

The station is unique in that it is run by dealers, for dealers.
“We monitor all accounts, whether residential or commercial. We have 35 companies in the station, and they know they can count on us,” says Smetana, who worked for five years as an operator in a monitoring station, from 1994 to 1999.

“We have found we can service the clients better by paying greater attention to detail,” says Smetana.

It was a lack of customer service that first drove Smetana to consider starting his own central station.

“We weren’t happy with anybody else who was out there monitoring our customers,” he says.

Smetana admits the model he has created is a little unconventional.

“It’s unique because most dealers would think it would be negative because technically we’re the competition, which is true. However, in our situation, we as owners have signed off on an agreement that, if we are bidding on a job and we know one of our monitoring customers is in on the job, we would walk away from it  — you’re not going to bite the hand that feeds you.”

Smetana believes strongly in charging for what a service is worth and paying central station operators what they are worth too — ultimately the people answering the calls are the core of the business, especially when dealing with alarms in an emergency situation.

“I’ve always been of the belief that you can put $2 million worth of equipment in a central station and, if your operator is getting paid $8/hour, that’s the quality of service you’ll get. We pay our operators well — I’ve taken some from other companies, and they are getting more money starting with us than working 10 years with a previous employer.”

Remote video monitoring is a growing business segment right now for Smetana, mostly with commercial clients such as car dealerships but residential is still in the early stages.

“It’s definitely a huge business with all the police bylaws coming out, and that’s what’s driving it,” he says.

As hardware costs come down, the adoption of remote video verification in residential applications will become mainstream, says Smetana.

“If we had remote video monitoring to a point where we could patch in and verify the alarm, it would resolve a ton of issues for us as well as those in police departments and anyone responding to alarms.”

Once it becomes mainstream, the additional revenue attached to remote video verification will be a welcome revenue stream to an industry that has been seeing declining revenues.

“It will help the RMR, and quite frankly the industry needs it because alarm monitoring is starting to get to the point where dealers are going to start paying customers to be customers, because where do you go when you get to zero dollars?”

With their managed access control service, Smetana is giving customers a Kantech product which allows property management companies with 10 to 20 buildings to have an access control system that is monitored by the central station.

“If anyone needs a door unlocked or card changed, we can do it 24-hours a day and set them up on a pay-per-use service. If we unlock a door for them, it adds to the account bill. It’s good for big companies or even small clients who want an access control system but don’t want to invest in the control software,” says Smetana.

“We’ve had positive feedback on that.”