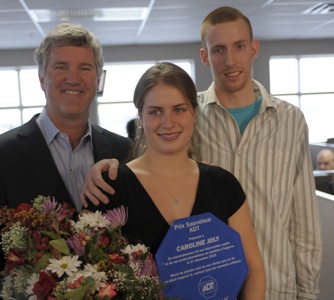 An ADT emergency dispatcher is being credited with saving the lives of a Newfoundland woman and her son after their carbon monoxide detector went off, signaling dangerous levels of the odorless gas.

Lynn Tucker and her 21-year-old son Chris were at home Dec. 17 when their CO detector went off around 10 p.m. The Tuckers ignored the sounding of the detector thinking it was malfunctioning. Earlier in the day some of the family dogs were playing in the house and knocked about three of the portable units and they believed that was what was causing the sounding of the alarm.

But it was the wired in unit, linked to the ADT monitoring centre, which was sounding off.

Back at the monitoring centre in Montreal, Caroline Joly, an operator with ADT for the last three years, immediately called the local fire department in Mount Pearl, a suburb of St. John’s, Nfld.

“When Caroline called us, my mom didn’t believe her — she thought it was just malfunctioning,” says Chris Tucker. “She argued with her as she was about to go to bed and didn’t want to be disturbed.”

But Joly persisted, encouraging the Tuckers to go outside and wait for the fire department to arrive.

When the fire fighters entered the home they detected extremely dangerous levels of CO.

“My mom wasn’t happy about the firefighters trudging through her clean kitchen but they told us my mom would have been dead within 15 minutes and me within the hour if it hadn’t been detected,” says Chris Tucker whose bedroom is in the basement of his mother’s home.

It was determined that vents in the family’s propane stove located in the kitchen had become blocked, preventing the poisonous fumes from exiting the house properly.

The family had to wait more than 90 minutes before they could re-enter the house after fire fighters arrived and determined it was safe enough to return.

“My mom called back to ADT the next day to apologize,” says Tucker.

For her efforts, Joly is the recipient of ADT’s first-ever Canadian Life Saver Award, presented from the company president, John Koch in Montreal Feb. 16.

The Tuckers added CO detection to their monitoring package 10 years ago. Chris Tucker says his father, who works on an offshore oil rig, decided it was worth the extra $5 a month to make sure his wife was safe while he was away working on the oil rigs.