News
Mobile ID on board 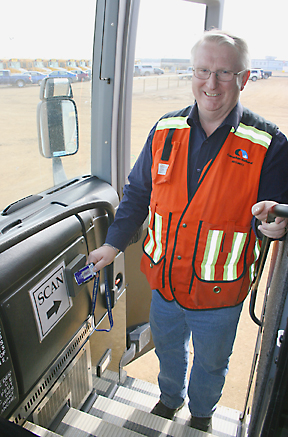 If you work at Canadian Natural Resources Ltd., a bus isn’t just four wheels and an engine — it’s a mobile data centre, wirelessly transmitting information about its passengers and location.

There are hundreds of people taking the hour-long bus trip from Fort McMurray, Alta., to the CNRL Horizon Oil Sands, where the precious black stuff is mined, pumped and purified for sale. What CNRL security specialist Rick Steele needs to know is: who is riding those buses at any given time; whether there is anyone on board who shouldn’t be; if there are any incidents taking place that require the attention of security or the local authorities; and the exact location of each bus on the road.

Steele currently has access to all that data thanks to a collaboration between CNRL’s security and information services departments and several important partners.
The project came together when CNRL had to select a bus provider after the contract with its existing provider ran out in 2008.
CNRL had used handheld card scanners on its buses for several years, but they had proven unreliable, said Steele. “They’ve provided us with a multitude of issues, with synching back — they were not (providing) live data — having to synch them back, get the reports. There were issues with bus drivers having to use them. It just became a monster for us at times.”
CNRL made on-board personnel scanning and real-time data a requirement in its bus transportation RFP. So when local provider First Canada Bus won the contract, CNRL was looking for suggestions. First Canada came back with a solution out of Seattle that had been deployed on school buses — a keyfob system where data is backed up at individual schools.
That wasn’t good enough for Steele since it does not allow for real-time data transmission. Steele also insists that CNRL partners work with their existing infrastructure. CNRL employees all carry HID cards for access control in and out of the oil sands offices and buildings — why not use them on buses as well?
It was this kind of thinking that garnered Steele and his team the SP&T News Security Integrator of the Year award, sponsored by Anixter Canada. Steele told First Canada Bus of his requirements and began to assemble a group of partners that could make the project a reality.
“We give one card out to one person and we want it to be used for as much as possible, if not everything. We use it for access control, so we had to make it work for the buses. First Bus went out and found a company in Ontario called Geotab. We started working with them,” says Steele.
Oakville, Ont.-based Geotab Inc. makes GPS vehicle-tracking hardware and software.
“It combines a lot of really cool stuff, including GPS  location,” says  Colin Sutherland, vice-president at Geotab. “But more importantly, for Rick’s application, the ID of various passengers. There was quite a good amount of device integration on board.”

In order for Geotab’s technology to work with First Canada Bus’s card readers and CNRL’s database, Honeywell was brought into the fold. CNRL uses Honeywell’s Enterprise Buildings Integrator (EBI) for its access control data management.
“That database is integrated into other management systems that CNRL has. They asked us to provide integration with the bus system,” explains Honeywell account executive Adrian Francese.
“They wanted the system to be capable of running reports out of the EBI system for a particular card and being able to see all the on-site events, plus the bus transactions as well. That’s what triggered the integration.”
The system was installed on the first bus (there are 36, plus three mini-buses) in February 2010 by a Geotab technician. It was tested for a month to six weeks before it was deemed a success. Eventually, First Canada Bus mechanics were trained to install subsequent systems and they continue to maintain them.
“It shows the bus number, when the card was scanned, when it was uploaded into the EBI system. That marries up with the person, and then bingo:  (it shows that) ‘Rick Steele, you got on bus 602 at 4:48 in the morning,’” says Steele.
“There’s 1,000 people (on the site). If you have to do a major evacuation, you have to know who’s out and who’s not out.”
Todd Hansen, manager of the Fort McMurray region for First Canada Bus, says the transportation company is used to dealing with the requirements of oil companies — it serves several in the area — but “our relationship with CNRL was more of a partnership rather than a client/contractor type of relationship.”
It helped that Hansen also has a history with CNRL — he worked at the company for several years as transportation co-ordinator before joining First Canada Bus earlier this year.
“We were pretty open with it. First Canada has their own security needs. We basically said to CNRL, ‘This is what we require. If there’s anything that you need, you just let us know and we’ll get it set up.’ Basically, that’s what we did.”
The new system is significantly better than the handheld scanners that CNRL was using before, says Hansen, which involved data lag times of two hours or longer “depending on the human factor involved — being able to actually physically do the download. With this system, it’s almost immediate. Within a few minutes, we can get a scan, send it through the Wi-Fi system and it gets picked by the CNRL database instantly. The security is almost real-time security.”
By having access to real-time data, CNRL can react quickly to any given situation.
“If we get a card that comes back as negative or not allowed or there’s a security risk involved or a potential breach, we’ve got about an hour to react, which is by far better than any of the remote systems that we had in place previously,” says Hansen.

“Even three years ago, we would be forced to use a remote system, which has got a lot of time delays or nothing at all, like a sign-in sheet. It’s head and shoulders better. We’re basically going from nothing to everything with this system. I wouldn’t want anything else.”
Steele led the project and co-ordinated the partners. His team of security and information services personnel acted as the steering committee, making sure the pieces all came together and the rollout process was smooth.
“It all sort of ran through me. It was something that evolved over many, many months, but when we got it going, we were pretty proud of ourselves,” says Steele.
“We’ve got a strong team with our IS people. We’re taxing them sometimes. We come up with ideas and we want to do something and they’ll say, ‘Yeah, it should work.’ And if it doesn’t work, we get them to make it work. It’s a strong IS connection that we have. They work really well with is.
“It was truly a team approach, even though it was spearheaded through the security department. It wouldn’t have happened without the other players on board — our own IT department, right down to First Canada Bus, Honeywell and the other companies involved. Everybody had their portion of the total project.”
Steele applies the same spirit to other projects at CNRL, right down to the vending machines on site.
Employees are allowed a certain number of free bottles of water a day. The vending company that supplies drinks and snacks to employees proposed a system where tags are attached to employee ID cards and used to keep track of the number of drinks an employee has taken in a day.
“But I said, ‘No, we’re not going to manage your tags. You make your system work with our badges,’” says Steele. “So every morning we download the newest badges that have been issued to the vending company, as well as the ones that have expired or terminated. They add them or delete them from their system. So when I want a bottle of water, I scan my card, and it says, ‘Go ahead.’”
Steele says there have been a few minor glitches with the card solution on buses, but nothing to worry about.
“I monitor the buses weekly. First Canada Bus does too. And when a bus shows up that’s not communicating like it should, they start signing out handheld readers until it’s fixed.”
There has been one incident that required the attention of security since the wireless solution was installed, he says. There was a person on board a bus who wasn’t supposed to be there and the situation was dealt with, says Steele, without elaborating on the details.
Steele is already looking at potential improvements. As soon as CNRL can upgrade its EBI platform to 4.10, which should be sometime next year, the system can accommodate e-mail alerts to dispatchers, who will be able to make judgment calls about ID cards that are flagged as expired. It’s possible that an ID might have expired due to a person taking vacation or a health-related leave.
Steele’s first concern is for the health and safety of CNRL employees. If a human being is in the loop, so much the better. With a strong development team and solid partners in place, the technology should take care of itself.
Print this page