Features Applications
Mastering key control at U of T 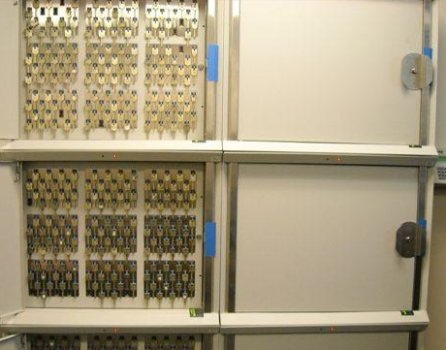 For many large facilities, key control remains a huge headache and cost factor. Lost master keys are expensive to replace and they often have too many keys on bulky key rings with too many users who could potentially lose them.

So consider the potential pain involved when you’re the largest university campus in North America. With 70,000 students the University of Toronto is, by population, the largest post-secondary institution in Canada and the U.S.
Watch the video.

Historically, the key management system at the university’s facilities and services department involved having locked key boxes within caretaking offices. Over time, those antiquated key boxes were bursting with keys, often labeled and too easily plucked off their hooks by the wrong people. The key rings became huge and security started to drop off.

According to Dan Hutt, director of Campus Police for the university, the facilities and services department decided it was time to clean that process up and manage the keys with a more centralized, secure approach.

In 2003, the university developed a key control and access control standard. Two buildings at 30/35 Charles Street West in Toronto were the first to receive a new key system in the standard. Those buildings serve as student family apartments.

All of the apartment deadbolts were replaced with MedecoM3 high security deadbolts. Between both buildings there were more than 700 apartment locks in each building. Reilly’s partnered with Morse Watchman on the project to provide the school with key storage of the new high security keys.

“The Morse system was able to offer the university what they wanted in terms of managing and properly securing their keys,” says Greg Brazas, operations manager with Reilly’s Security.

The system allows the university to put keys on tamper-proof key rings, which then go into the tamper-proof box and assigned accordingly.

“It can be assigned to specific individuals for specific times whether (it’s) for one hour or if they are only supposed to be there between 9 a.m. and 12 noon. It means the university doesn’t have to maintain any kind of paperwork that might lead people to find out any important information such as which key might be a master key,” says Brazas.

The beauty of the system is that a user can assign details to the key yet there is no information apparent on the keys to make them vulnerable to being stolen.

When the university facilities and services department found a need to manage the keys carried by employees and contractors during working hours the same model was chosen.

“It’s a similar system that enables us to create a networked system within the university. The key cabinets will be networked and the keys placed in the box at a central point. The keys on the rings will be recorded in the system centrally and can be both centrally and locally managed,” says Hutt.


The state of the art cabinets utilize locking key tags and the tags are only released when the proper user code is entered into the box. The cabinets can be programmed to have only specific keys released.

“We’ve linked the networked key box systems — there are about 45 sites on campus that have the key boxes and they are linked to the access control system which is managed by an HID electronic iClass fob system,” explains Hutt.

The system is capable of providing full audit reports and alarmed events can also be emailed to a BlackBerry device for follow up. The system also has the capacity to incorporate a card reader should there already be a card access system in place or a biometrics reader.

The system not only controls which university employees have specific keys, but outside contractors such as carpet cleaners, for example, will have a single box with all keys they need. The caretaking managers will determine which keys can be taken on which days so those keys can be released only on those days.

“If you’re a cleaner, you use your fob to open the box and the system will record that you have returned the keys,” says Hutt.

And if the school needs to remove someone’s permission to obtain a key from the system, it can happen almost instantly.

“We can remove access in about 10 seconds — it’s tied to the human resources system so we have the ability to manage access in real time,” says Hutt.

The initial project for facilities and services cost in excess of $1 million, but as Hutt points out, the potential return on investment is huge when you consider the cost of re-keying in a campus environment like U of T.

“Return on investment is very difficult to determine when you make an administrative system better, but our greatest fear is that our staff will lose a key ring and key rings often contain many master keys for buildings. If we had to completely re-key some of our larger buildings on campus it would be half a million dollars for each of those buildings.”