John M. Merklinger, director of the Rochester/Monroe County 911 Centre and 311 Call Centre, is the recipient of The Monitoring Association’s 2017 Public Sector Award, given in recognition of a public sector individual’s contribution to the alarm industry. 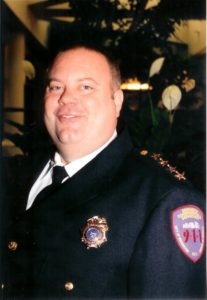 “It is our pleasure to recognize John for his tireless efforts to advance the implementation of ASAP – the Automated Secure Alarm Protocol – in New York State,” said TMA president Pamela Petrow. ASAP is a technology that automates communication between alarm monitoring central stations and 911 centres, “resulting in improved accuracy and speed of emergency response”, TMA added.

Petrow and past president (and current executive director) Jay Hauhn put Merklinger’s name forward for consideration — the award recipient must be nominated by one or more TMA members “in good standing”.

“New York State was projected to be one of the last states to implement ASAP due to the states unique IT infrastructure,” said Hauhn. “Merklinger, who understood the value ASAP would bring to his centre, spearheaded an effort by New York PSAPs to work with the state police to have the needed changes to the state CJIS network funded, scheduled and successfully completed.”

“We are proud to be the first PSAP in NYS to go live with the ASAP protocol,” said Merklinger. We believe this will be a benefit to the public and the public safety organizations by providing quicker entry and response to alarm generated emergencies.”

He will be presented with the award at the 2017 Electronic Security Expo (ESX) Public Sector Luncheon on June 16, at Music City Centre in Nashville.