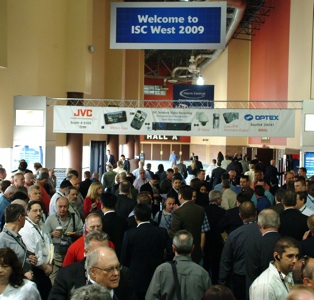 Despite concerns from exhibitors that ISC West would see a significant drop in attendance due to the recession, about 22,000 people attended ISC West show in Las Vegas last month, 14,000 of which were buyers, according to spokesperson Beth Blake. Organizers Reed Exhibitions typically boast attendance of around 26,000.

Some attendees said the individuals visiting booths represented a more
serious buyer than in years past, and activity was brisk on the 290,000
sq. ft. show floor consisting of 900 companies — 150 first-time, new
exhibitors and international participation in the Global Expo, which
comprised 36,000 sq. ft.

Consistent with years past, the dealer/installer/integrator and
end-user audiences topped the list of industry professionals
represented. According to organizers, About five per cent of the
audience was from Canada, which is about the same as last year.

Those who were staffing booths said traffic was steady and exceeded
expectations. For some, location, booth size and what the booth had to
offer helped draw crowds.

“We were expecting a softer attendance going in, but we were very
surprised,” says Norm Hoefler, country manager, Canada for Bosch
Security Systems. “In our view, we felt that the traffic actually
exceeded prior years. We made a significant investment in our booth
size (60 X 60) and in our interactive product application stations. We
are of the opinion that this attributed to the volume of traffic in our
booth.”

Bosch staged an Intelligent Video Analysis (IVA) challenge using a
football scenario. Participants could win prizes based on how far down
the field they could go. Contestants who made it to the end zone
without triggering an alarm won a prize.

In terms of the attendee interest in products and services at the
booth, Hoefler says, “Our expectations were that those who did make the
investment to attend would be the serious players. This was indeed
confirmed.”
Honeywell also held prime real estate at the show and was happy with
the turnout at the show. “We were pleased with the traffic in our booth
at ISC West.  We didn’t know what to expect in the current environment,
but it turned out be a  good show,” says Chris Welling, vice-president
of sales, Honeywell Canada. He says the company has confirmed it will
also be exhibiting at both ISC East in New York and Security Canada
Toronto shows in the fall.

Whitby, Ont.-based Keyscan increased the size of its booth, going from its originally planned 20X20 booth to a 20X30.

“The increased booth size and overall marketing presence is part of our
five-year strategic growth plan. We are executing our plan, regardless
of the soft economy,” says Steve Dentinger, director of marketing for
Keyscan. “Going into ISC West we were bracing for poor attendance as
most exhibitors were. Despite concerns though, our booth was extremely
well attended and we gained tremendous traction with the suite of
products we introduced at the show.”

About 10 per cent of the total ISC West attendance represented buyers
for the Public Security & Safety expo including: government; law
enforcement, military; campus and transportation.

“We were quite pleased with this year’s results,” says Ed Nichols,
vice-president, ISC Events. “I can confidently say that despite some
trepidation on the part of the industry in the first few months of the
first quarter and just prior to ISC West, those concerns were abated by
the fact that qualified buyers were on the floor buying and that ISC
West set a positive buying tone for the rest of the year.”

ISC West also offered a “Meet the Press” session where manufacturers
could network with trade magazine editors to learn how to more
effectively work together. This event is expected to be repeated at the
ISC East show in October.

At the CANASA East show  held April 21 in Montreal, attendance was up
five per cent but booth sales were down three per cent compared  to
last year, according to Steve Basnett, director, trade shows and events.