Walking to classes, exploring the neighbourhood, making friends, studying into the night — the student residence can be more than just convenient lodging, it is a safe haven, the hub of campus life. 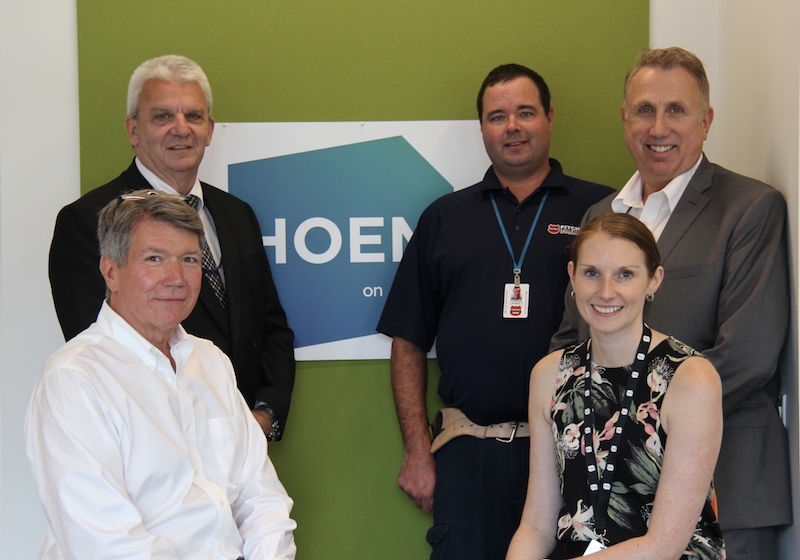 This is the experience that HOEM, a 30-storey residence building in the heart of downtown Toronto, wants to convey — a pleasant, welcoming environment that serves as the home (or “hoem”) for students attending nearby Ryerson University.

The building is located within the main Ryerson precinct, which itself is basically across the street from the Eaton Centre shopping district, one of Toronto’s busiest locales.

When Canadian Student Communities Inc. (CSCI), HOEM’s developer, owner and operator, acquired the lot where the building now stands, “we weren’t sure of the development that would be built on the site but we were aware that Ryerson was in the area,” explains Tom Powers, vice-president, CSCI. “Student housing was an area that we spent a lot of time researching and exploring prior to deciding to pursue a student housing project on the site,” he says.

“Several years ago, we approached Ryerson with respect to building a residence on this site. We went through a request for proposal and got selected to build,” he says.
The process started in earnest in 2015. Reliance Construction served as the project manager and general contractor for the building and a number of consultants were brought in to help complete the project. “We brought in a lot of sub trades and a lot of specialty trades, including Fitch Security,” says Powers.

Fitch Security Integration, a Toronto-based business that has provided security services to clients for almost 40 years, was selected as the integrator for the project, furnishing the new facility with cameras, access control and duress systems. HOEM has 30 floors, 172 residence units and 593 beds. It also includes common areas, lounges, a gym and yoga studio.

Fitch outfitted every suite and bedroom with an IN120 WiFi lock from Sargent (an ASSA ABLOY company). According to ASSA ABLOY, the project is the largest WiFi lock install of its kind in Canada. For its technical expertise and customer service, Fitch Security is awarded SP&T News’ annual Integrator of the Year award for 2018, sponsored by Anixter Canada.

Security might not be foremost in students’ minds but it a cornerstone of residence life, says Powers. “One of the things that makes us different is we look to build a student community and we’re very invested in student satisfaction. We want to make the building comfortable for the students so that they can spend their time making friends, working on [school] work and building relationships. We don’t want them worrying about security or any aspect of the physical premises. We just want to make it comfortable.”

Fitch came into the project as major building construction was completed and after the electrical contractor had run conduits.

“We had a lead technician who was in charge of the project and obviously technicians working under him as well,” explains Jeff Oliff, the Fitch account manager who led the security implementation of the HOEM project.

“All the cables were pulled, pretty much, before we did anything else. As the building went up in height, as well as finished on the inside, then we came in and finished as much as we could in stages as the project went on.”

Fitch installed 117 cameras — a mix of 2MP and 5MP Interlogix units (103 inside the building in common areas and 14 on the building’s exterior) — and 766 IN120 locks running over HOEM’s student WiFi backbone. The cameras are monitored locally via an Interlogix NVR. Video is retained on almost 100 TB of storage. The locks and card readers are managed via a C-CURE 9000 platform from Software House.

WiFi is becoming more common as a reliable transport network for access control, but it is not without its foibles. Because the IN120 locks are running over the same WiFi network that the building uses for student Internet access, they are completely segmented in a non-broadcast SSID in a private partition riding on a separate subnet.
A major issue that Fitch had to address was that the WiFi network on site wasn’t live at the time of construction, yet all the locks had to be installed in a fully operational state. As such, they had to be configured and pre-programmed first. Fitch dealt with that potential roadblock inside its own facility before transporting the locks to the HOEM residence.

“We set up a production line at our office where the locks were inventoried, labelled, barcoded, all the parts checked, pre-programmed with all of their serial numbers and IP addresses and subnet masks,” explains Ed Fitchett, owner and president of Fitch Security. “And then at the end of the line, we had a session where the locks were loaded with batteries and tested so that the cards that both we and the site would use were fully operational.”

Essentially, each lock was set up with ASSA ABLOY’s LCT (lock configuration tool) and programmed on C-Cure using Fitch’s own WiFi network to ensure its operation. In some cases, the locks were installed a year before the WiFi at HOEM was activated, but they still had to work as advertised.

“The client used them as construction locks,” adds Fitchett. “As they finished a suite, they would lock it up … But the lock had to be able to accept a card. So that lock had to be fully functional before it left our office, because we had no means of programming it with WiFi after the fact. Every single lock came pre-loaded with everything it needed to operate without the use of any WiFi at all.”

This assembly line process took approximately six weeks, says Fitchett, and was instrumental to the success of the project.

Fitchett sings the praises of the lock unit itself. When it was first selected for the job, it was the only WiFi lock of its kind, he says.

“There are others coming and others that may be here now, but at the time there was no other lock that would reside on a client network… A lot of wireless locks don’t have the capabilities of the IN120. [It] can report door forced, door ajar, key over-ride and low battery… it doesn’t need a card to program it; it’s not like a hotel lock. Yes, they go to sleep to save battery power, but when it needs to use the WiFi to transmit an event that occurs, it does.”

The IN120 requires six AA batteries to operate, which can last up to two years before they need to be changed. If a user presents a card to a lock and the batteries are getting low, the lock will flash three times and beep. “I’m hoping the students will pay attention to that,” says Fitch service technician Darren Laybolt. If students don’t notice, HOEM’s administrators can monitor the battery levels of each lock using the C-Cure interface. “They can get ahead of it and be more proactive,” says Laybolt.

The locks are also set up for “escape return.” The door will only lock when deliberately presented with an access card to prevent a resident from accidentally being locked out of their room or unit. The initial batch of access cards were programmed by Fitch, but HOEM can program, re-program or deactivate cards as needed going forward.

When these interviews were conducted by SP&T News in August, HOEM was weeks away from its first official school year with 600 students due to move in. Getting the building ready in time for its September student occupants put some pressure on the overall construction of the building. Missing that window would mean waiting a whole extra year. But it was completed roughly a month ahead of schedule, according to Powers, and began accepting ESL (English as a second language) students during a trial period over the summer.

“We all shot for a May opening and the building was actually finished substantively in April,” explains Powers. “Then we went through the occupancy permitting process and put in the finishing touches in the last few months.”

“It’s the same with many jobs,” says Oliff. “As people start moving in, they start realizing that a door is not covered… that sort of thing. [Now] we’re very, very close. The system is up and running. It’s functioning and working very, very well. They seem very happy with it.”

“They’ve done a great job with the building,” agrees Powers. “We think we’ve got some cutting edge product. Fitch went above and beyond any other contractor on our site. The experience was totally enjoyable and we are already working with them on our next project.”

Fitchett adds that relationships between the parties involved — HOEM, Reliance and technology partners ASSA ABLOY, Software House and Interlogix — “were all super. It helps to have clients that are knowledgeable and understand the deployment of systems like this. This system offers them the ultimate protection for their student clients.”