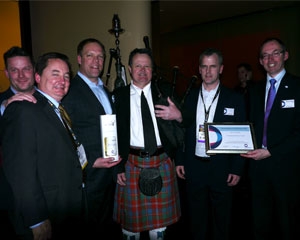 In front of a capacity audience at the Venetian V bar, five IndigoVision VARs were each awarded a trip to IndigoVision’s headquarters in Scotland.

‘Largest Single End User Order’ went to Data Consultants for their project with the largest environmental solutions provider in North America, an end user that serves over 20 million customers in the U.S., Canada and Puerto Rico.

The award for ‘Largest Year-On-Year IndigoVision Sales Growth’ went to Minuteman Security Technologies. Based in Massachusetts, Minuteman have achieved superb IndigoVision sales from a number of projects, including several universities and colleges in New England.

‘Most Exciting IndigoVision Project Win’ went to I-Vision, a Canadian VAR who have worked with IndigoVision for nearly 15 years. The winning project was Science North, Canada’s second largest science center, which saw IndigoVision’s Environmental cameras deployed to overcome extreme outdoor temperatures of up to -48 C / -54 F.

Winners receive a trip to IndigoVision’s headquarters in Scotland, getting exclusive insight into research and development and seeing IndigoVision’s solution in action at Gleneagles, home of the 2014 Ryder Cup.