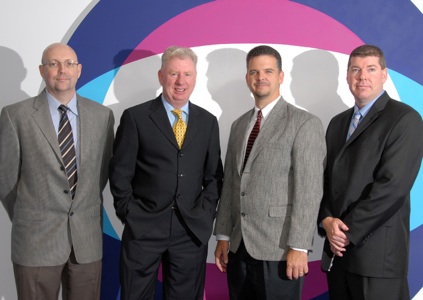 From left: Jonathon Kelly, Bill McQuade, Dan Graham and Grant Foster
IndigoVision, a manufacturer of IP Video security solutions, has made a number of changes to its team as part of its continued expansion in North America, including the promotion of Bill McQuade and the addition of Grant Foster, formerly of March Networks, to the sales team

McQuade has been promoted into the new management role of senior
vice-president for North America. Reporting to Oliver Vellacott,
IndigoVision CEO, Bill has full responsibility for driving the next
phase of the company’s expansion in the region. Bill has worked for
IndigoVision for six years in senior sales roles and has extensive
experience of the North American CCTV market.

Grant Foster has recently joined the IndigoVision sales team in the new
position of director of business development — North America. Grant was
previously director of sales for March Networks.

“I’m confident his experience can help us penetrate new business
opportunities and build on recent successes in the banking and retail
sectors,” said Bill McQuade in a statement. “With his knowledge of the
IP video market, Grant is a major asset for the team and key to our
expansion plans.”

To further bolster the North American customer support operation Dan
Graham has been promoted to sales engineering and support manager and
California-based Jonathon Kelly has recently joined the company as part
of the technical support team. Jonathon was originally with Dedicated
Micros and has a Bachelor of Science in Computer Science and extensive
knowledge of networking technology and programming.

“These organizational changes are part of an exciting new phase for
IndigoVision’s growth, in which we are strengthening our presence in
North America,” said Oliver Vellacott in a statement. “We are
relocating technical support and marketing from our European HQ to
North America. Bill’s experience of security in the region will be
invaluable in achieving this and making our business more responsive to
our partners and their customers.”