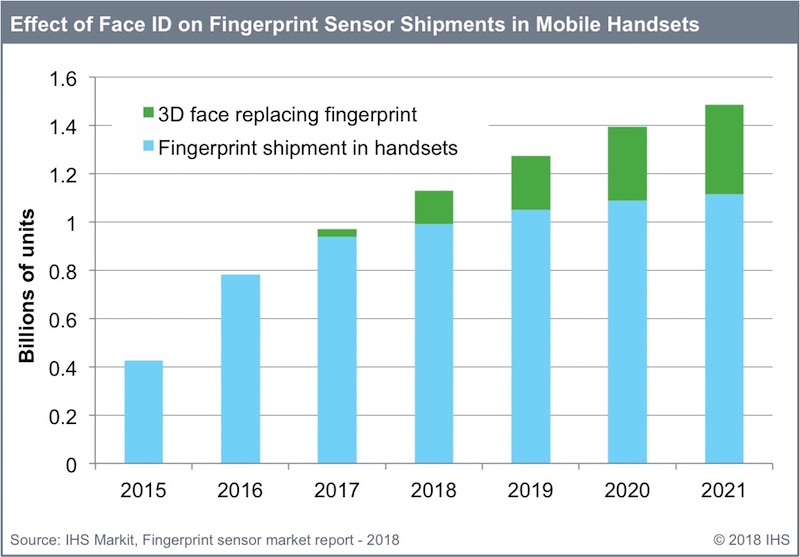 According to the report by Jamie Fox, principal analyst, LEDs and lighting, IHS Markit, “the fingerprint sensors market is facing a major disruption following the introduction of Face ID, a facial recognition system designed and developed by Apple Inc. for its iPhone X.”

This means that there will be 1.1 billion fewer fingerprint sensors produced by the end of 2021, says the report. This estimate is the combined total from Apple and other competitors who will implement face-recognition solutions, and is based solely on mobile phones.

As the market moves to under-glass sensing, ultrasonic and optical sensors will replace capacitive sensors that cannot send signals through glass.

“Over the next two-to-three years, the fingerprint sensor market is likely moving toward a true ‘in-display’ solution, where the sensor is not just under the display, but also integrated into the display itself. These sensors will likely be able to recognize fingerprints in a large area of the display or even the entire display,” says IHS Markit.

Additionally, the report notes the new competitors that have emerged in 2016 and 2017.

Goodix is the largest of the new competitors, and it is challenging Fingerprint Cards for the lead position in the market in 2017. Silead has also won share in China in 2016 and 2017, while Egistec has gained design wins at Samsung.

In 2018, the report adds, there may be newcomers to the market such as InvenSense.

Recent competition has driven commoditization in capacitive sensors, leading to lower packaged sensor prices, which fell under two dollars in 2017.