According to a report from IHS Markit, mass-notification system (MNS) software used in emergency communication, the primary segment used during a catastrophic event, is expected to grow in the Americas at a compound annual rate (CAFGR) of 6.8 per cent from 2017 to 2021, reaching $293.1 million in 2021. 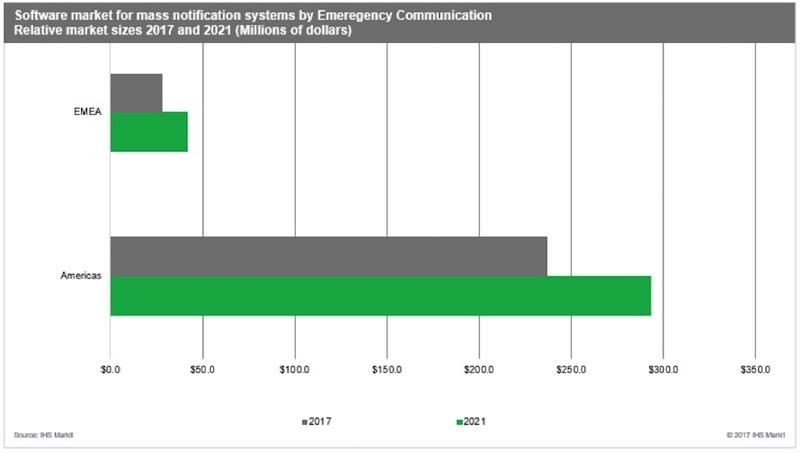 Additionally, due to heightened terrorist activity in Europe, and with U.S.-based multinational companies moving to Western Europe, the MNS software emergency market in EMEA is expected to grow at a CAGR of 11.4 per cent from 2017 to 2021, reaching $41.6 million in 2021.

In the Americas, hurricanes, tornadoes and earthquakes are occurring more frequently, so unimpeded mass communication during these events is critical, says IHS Markit. However, in Western Europe weather-related incidents occur less often, so the need for MNS software is lower.

While this certification is not mandated by law, IHS Markit says it will affect how software-as-a-service (SaaS) and cloud vendors perform business with federal government agencies — increasing MNS software sales by the federal government, because nearly all vendors in this industry will switch to cloud-based solutions.

But Western European governments will continue to use on-premises or hybrid solutions because they are constrained by local laws and regulations surrounding the use of personal information and privacy. The report adds that a majority of cloud-based MNS software market leaders are located in the U.S., which creates additional lag time for cloud systems to be purchased in European countries.

Additionally, the report says new MNS platforms can reduce human error, such as the false missile alert in Hawaii that occurred in January 2018.

Finally, privacy laws and regulations are slowing the adoption of cloud-based MNS software across Europe.

Privacy issues need to be addressed on a country-by-country basis, including the location of servers hosting cloud-based platforms.

“Increasing acts of terrorism across Western Europe and North Africa over the past two years have forced central governments to investigate new and innovative ways to keep the general public safe,” says IHS Markit. “While most investment goes toward security cameras, access control, security doors and tough perimeter security, some governments will also choose to buy MNS software to facilitate communication between first responders and security teams.”