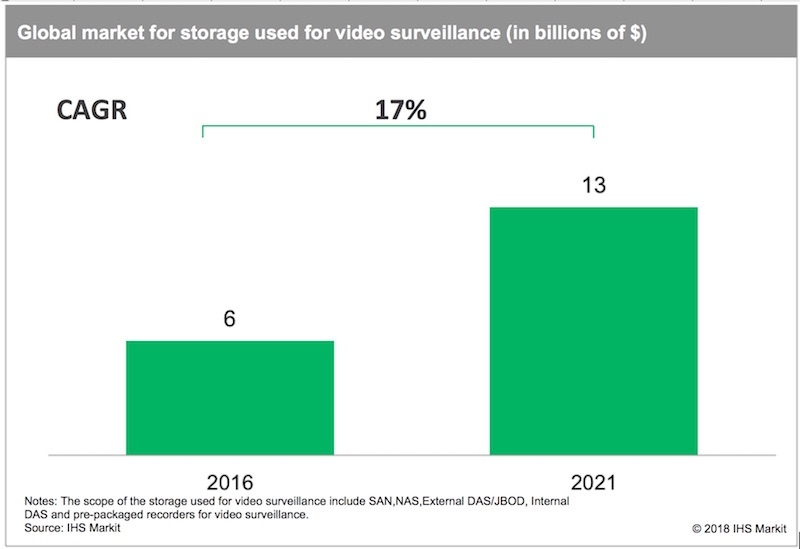 Global revenue from storage equipment, a key element of ICT infrastructure, has been growing rapidly. According to the latest “Enterprise and IP storage used for video surveillance report” by IHS Markit, global revenue from storage used for video surveillance is forecast to grow at a CAGR of 17 per cent, from $6 billion in 2016 to $13 billion in 2021.

At the same time, traditional video surveillance vendors have started to offer ICT products to complement their solutions. For example, Hikvision announced its AI Cloud concept at CPSE 2017, and Dahua and NetPosa showcased their video-structuring servers.

One major implication of this convergence is that traditional video surveillance business models are likely to be influenced by concepts from the ICT industry, says IHS Markit.

For example, an open hardware platform with a related software ecosystem is a typical ICT concept. Huawei is now introducing this concept to the video surveillance industry. In March, the company announced its software-defined camera (SDC) concept, claiming it will enable diversified video analytics algorithms, developed by the independent software vendors (ISV) ecosystem, to run on one camera.

According to Huawei, SDC will decouple the software from its hardware, based on its open operating system, open integration framework and unified algorithm management platform on the cloud.

The video surveillance market is becoming increasingly intertwined with other industries, the study concludes.

ICT and telecom suppliers are now competing for business where there were once dedicated security distributors and integrators. Advanced ICT infrastructure integrating IoT devices across the network has replaced traditional analog cabling between devices.