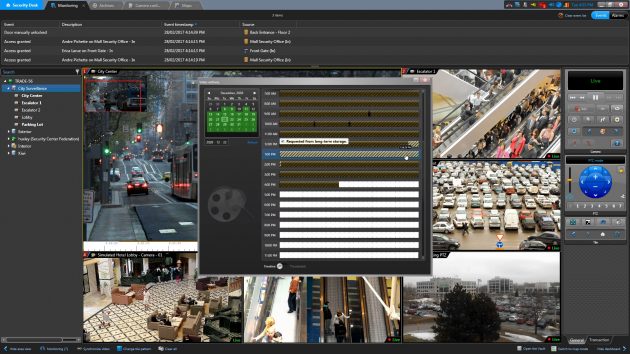 Security Center — the company’s flagship security and analytics platform — is designed to help customers migrate to the cloud, and acts as a bridge between on-premise and cloud-based systems.

According to Marc-Andre Bergeron, director of sales, Canada, Genetec, that migration from on-prem to cloud is moving faster all the time.

Security Center’s cloud and hybrid capabilities are “right in line with the trends that we’re seeing in Canada,” said Bergeron in a product briefing with SP&T News.

Bergeron draws parallels between the increasing convergence of physical security and IT security systems, and the move to the cloud. “The shift was already happening. The synergy that we’ve been seeing between security and IT has been happening for the last five to 10 years,” he said.

Bergeron said he remembers a time when meetings with security and IT departments occurred completely separately, but those instances are now rare. “The synergy is moving closer and closer every year,” he said, adding that the events of the last year-and-a-half have given this trend “a massive boost.”

“The pandemic bridged that gap and brought IT and security completely together. Unless you’re running a very, very small business right now, your IT department is an integral stakeholder of every project that has IoT devices. And it needs to, or else it becomes a cybersecurity concern.”

Skills mix
With the intertwining of physical and logical, and greater tolerance for security systems in the cloud, comes a need for different skills from the installer. “You’re looking at connecting, configuring, making sure that you understand the network, making sure you can troubleshoot a combined network, and making sure that you can actually access the cloud. The skillset has changed — the community is adapting to that,” said Bergeron.

Even for the end user, there are some fundamental differences in how these projects must be approached and budgeted, he said. Security equipment might be an upfront capital expenditure, for example, whereas cloud-based services (surveillance as a service or access control as a service) are an ongoing, operating expense.

But as much as IP-based systems and cloud-based architecture have fundamentally changed the game, there are many aspects of physical security that still require a literal hands-on approach. Cameras and card readers don’t install themselves.

“When you’re talking about physical security, there’s always that component of integrated security and dependencies that are on site. That’s never going to disappear,” said Bergeron.

Likewise, if a device fails, maybe it can be tested remotely but eventually someone is probably going to have to drive out to the site and take a look in person. “[For example], a camera stops working. What are you able to do remotely? Maybe try to reboot the camera. There’s only a small portion of things that you can actually do remotely. If something stops working, typically it’s at the device [level].”

Hybrid approach
The move to the cloud may be underway, but there are still limits as to what is achievable today, or even desirable, when it comes to that migration. For many, the preference is a hybrid approach that leverages the strengths and assurances of on-prem with the agility and convenience of the cloud.

“For us, a hybrid system has portions on-prem and portions in the cloud, so you’re bringing the customer closer to what they want,” said Bergeron, adding that smaller systems, with fewer cameras are a natural fit for the cloud, whereas very large camera installs may still experience bandwidth issues that could limit that approach. “But the shift is happening. We’ve been feeling it for a while, but now we’re actually starting to see large systems moving directly to it,” he said.

In addition to its Security Center platform, Genetec is also demonstrating several other products during GSX. Synergis is an open architecture IP-based access control solution which can help users “migrate from their obsolete access control systems and replace outdated technology that could leave them vulnerable to cyber threats,” according to company press release.