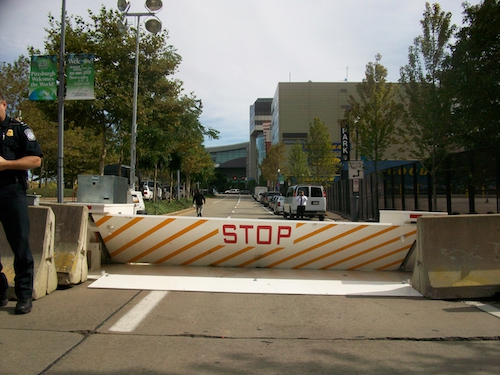 An example of a self-contained MP5000.

“With the highly publicized vehicle attacks in Nice, Ohio State, Berlin and, last week, in Jerusalem, it is an absolute necessity that attendees at the January 20 inauguration of Donald Trump be protected against this threat,” says Greg Hamm, Delta vice-president of Sales and Marketing. “In a tip of the hat to the Secret Service, they’ve been prepared for these threats since way before Nice. These barriers were used at both the Republican and Democratic conventions in 2012 and this past year as well as during the 2012 inauguration.”

The self-contained MP5000’s tow into position to control vehicle access within 15 minutes, Delta Scientific says, and no excavation or sub-surface preparation is required. Once positioned, the mobile barricades will unpack themselves by using hydraulics to raise and lower the barriers off their wheels. DC-powered pumps will then raise or lower the barriers. Once the event is over, procedures are reversed and the barriers are towed away.