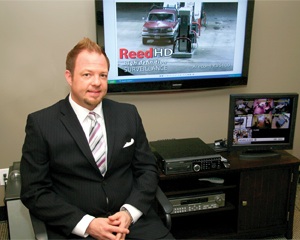 In a market dominated by a major competitor, Virgil Reed is trying to carve out a niche for his business, Reed Security, in Saskatoon, offering clients the latest technology to solve their problems and keep his own business moving forward.

While analogue still dominates his client base, Reed is introducing them to the benefits of HD video, going so far as to call it “Reed HD.” His showroom has been set up to demo ACTi, Arecont and Hunt megapixel cameras, with Arecont for HD and cameras tied into a Nuuo mini NVR.


Topics
“I’m 100 per cent focused on HD,” says Reed. He admits the bulk of his clients are happy with analogue, but he’s determined to bring them into the future of surveillance.

“IP is the future, but there’s going to be a market for both. Budget definitely plays a factor in the decision, though. In Saskatoon, people don’t know to ask about HD. The smaller the market, the less likely they are to embrace new technology, but I’m going to introduce them to it; it’s my job to make sure everybody knows.”

In a fast-moving industry, keeping customers up-to-date on new options and looking at sectors other than security to pull in new business is important to keep profits up as dealers and smaller integrators position themselves for growth.

Reed has been able to transition his business into an area that isn’t solely reliant on provisioning security applications. He’s applying security surveillance technology such as HD to non-security uses in food processing.

One of his first clients to embrace HD was Saskatoon-based Western Grain, which grows, processes and exports specialty crops. The company is using HD technology for quality control. When grain is being loaded into a grain car, the activity is recorded, as well as the serial numbers of the grain cars.

“There’s a huge market for HD in processing plants, and security is just a minor part of it,” he says.

Reed is part of the new generation of dealers that is looking to other sectors and embracing new technology to diversify their businesses.

He started in the security industry with ADT in 1998. He spent two-and-a-half years in commercial sales and decided he wanted to work for himself. He created his own company and now has nine employees.

To keep on top of advances in technology, Reed pays close attention to the dealer road shows.

“I picked up more in two hours at a recent Tri-Ed IP roadshow than I did the entire time in Las Vegas at ISC West,” he says.

Reed is also getting into the access control managed service market. One of his clients is the Saskatoon Housing Authority.

He also sees video backup and offsite storage as an opportunity in the future.

Leveraging megapixel IP video and analytics is the focus for Unified Systems, an integrator in Port Coquitlam, B.C.

They have been deploying analytics video technology in casinos to conduct people-counting, which is then used for marketing purposes.

“The advances in security technology are at a point now where we can start offering the tools to companies to be part of their profit centre rather than the traditional cost centre associated with security,” says Brian Kellett with Unified Systems.

Video analytics can help a casino determine how many people are in the building for fire code reasons. But beyond that, owners can also know how many people are coming in, where they walk to, whether they look at a display or always go in the same direction, and how many are in a restaurant between 2 p.m. and 4 p.m. on a given day.

Unified Systems has been working with analytics for several years but more for security purposes — screening for behaviours and events rather than having a guard watch cameras.

“What it did was bring to the guard pre-screened events and qualified events to review,” says Shawn Madsen of Unified Systems. “It’s since taken off from there. We’ve seen the value-add it can provide to our customers through open architecture integration, which allows us to merge the other technologies and bring in other groups like the marketing department and get them excited about traditional security technologies.”

By selling a company on using the equipment for gathering data on other departments, it also helps show an organization the value a system can bring to the overall bottom line.

“Appealing to the marketing side also allows you to help recover the cost of the overhead and apply it to the security side so it becomes an economy of scale,” says Kellett.

They have also leveraged megapixel IP infrastructure for customers with point-of-sale to give alerts on erroneous transactions.

“The megapixel technology and network-based architecture allows us  to give more tools and more value-add back to the customer,” says Madsen.

As the industry moves more toward network-based IP devices and edge technology, dealers and integrators who don’t take advantage of network technologies run the risk of being left behind.

Increasingly, Kellett says, there is also a demand for surveillance and access control systems to be integrated with HVAC systems.

“The customer doesn’t want to be looking at different things — they want one view.”

There will continue to be a business for those servicing analogue, but those who fail to expand into providing new technologies and into sectors other than security will fail to grow their businesses, says Madsen.

“The day of the digital video recorder is coming closer to an end as customers use encoders to connect them to network video recorders. The industry is changing faster than people realize,” says Madsen. “I believe there will always be a place for analogue because there are customers who have invested in their systems that will just want to maintain them, and the cost to get the benefits of IP can’t be rationalized for some customers today.”