Cloud-based home management systems that allow users to remotely control household features like lighting and air conditioning are set for rapid growth in the coming years, with the installed base set to rise by a factor of eight from 2013 to 2018. 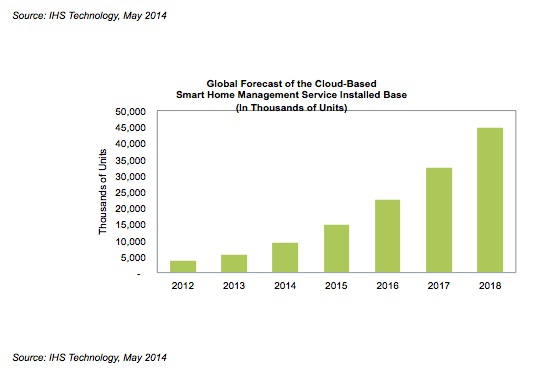 “Imagine using your smartphone or tablet to detect an intruder in your home or to adjust the temperature in your living room—no matter where you are,” said Lisa Arrowsmith, associate director, connectivity, smart homes and smart cities, for IHS. “Cloud-based home management makes all this possible, and much more. With a wide range of companies offering such solutions, the cloud-based home management system business will expand dramatically in the coming years.”

These findings are contained in the Smart Home Subscribers & Services Intelligence service at IHS.

Master of the house
Examples of use cases for cloud home management include:
– Receiving a notification on your smartphone or tablet when your children return home from school
– Remotely adjusting the temperature of your home while at work via your smartphone, tablet or computer
– Receiving alerts if an elderly relative deviates from their normal routine

One major group is existing service providers who have alternative core business lines, such as security or telecommunications providers and utility companies. These companies have entered the home-management market in pursuit of a means of reducing customer churn or increasing new subscriber rates and average revenue per user (ARPU).

Other types of companies also are entering the fray, including device suppliers and retailers.

Smart home specialists are expected to play a major role in the deployment of smart home services globally. This category of companies includes both home automation providers that are moving toward a cloud-based model, alongside a new breed of connected home specialists, such as Nest, Revolv, SmartThings, and others.

The American way
North America has been at the forefront of this market to date, in terms of user numbers. However, rapid growth is expected to follow worldwide.

In North America, security providers, such as ADT or Vivint, have been among the forefront of the market providing combined smart home and professionally monitored security systems. Telecommunications companies, such as Comcast or AT&T, also play a major role.

Safe European home
In the Europe-Middle East-Africa (EMEA) region, utility companies are expected to dominate, accounting for one-third of the installed base in 2018. Utility companies already offering or developing smart home devices or services in Europe include British Gas, Essent, Eneco, Nuon, RWE, EnBW, and Eon.

European multiservice operators (MSO) have generally been slower to enter the smart home service market than those in North America, although there have been exceptions such as Bouygues Telecom and Swisscom. Others, such as SFR and Orange, have also now entered the market, with further expected to follow.

Big opportunity in Asia
In the Asia-Pacific region, some multiservice operators have been offering basic smart home services for a number of years, although volumes have remained relatively low. As more enter the market,with wider value propositions and attractive tiered pricing, the role of MSOs is set to grow.