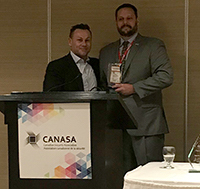 McMullen is a previous CANASA national president and was recognized again this year with the Excellence award for his continued support.

Ellery Demedash, who just completed his two-year term as president, received the National President’s Award. The Outstanding Contributor Award was given to Normand Fiset and John Georgoudes.