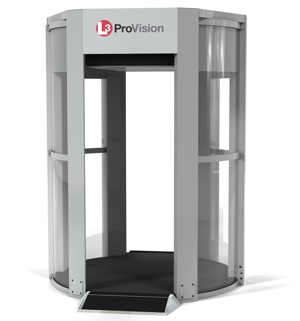 Starting this month, full body scanners will be installed at major Canadian airports. This technology will give passengers a choice between a full body scan and a physical search. The full body scanner will be used to reveal objects, including weapons and explosives that could be concealed under clothing.
“The safety and security of Canadians is of the utmost importance to our government,” said Merrifield. This latest passenger screening technology and passenger behaviour screening will be added layers of security, which will provide a robust defence to further protect air travellers.”
“Given the recent terrorist incident on December  25, our government is accelerating its actions to protect air travellers,” said Baird. “The new full body scanners are the next generation of technology and balance safety and security with safeguards to privacy. They will allow for additional flexibility and enhancement to the security screening process.”
The full body scan technology generates images of the body to allow the detection of items being concealed under clothing without contact between the screening officer and the passenger. This is a voluntary option for passengers and provides a screening alternative to the physical search. CATSA says the scanners will not be used with children.
The scanners, which cost about $250,000 each, are used in over a dozen countries around the world. The full body scanners are deployed in airports as well as land border crossings, correctional facilities, courthouses, military checkpoints and commercial applications.
The technology works by projecting low-level millimeter wave radio frequency (RF) energy over and around the passenger’s body. The RF wave is reflected back from the body and from objects concealed on the body, producing a three-dimensional image. The entire screening process is harmless and takes about one minute.
The technology detects “anomalies” on a passenger, including metals and non-metals of all types, sizes and shapes; ceramic type threats such as knives and sharp instruments; liquids of all types; and explosives of all types.
The full body scanner technology was tested last year at Kelowna Airport over an eight month period to evaluate security effectiveness, collect operational performance data in an airport environment and validate the screening protocol for this type of technology. Health Canada was consulted on the use of the technology and has indicated that it complies with Health Canada requirements. In addition, the Office of the Privacy Commissioner of Canada has confirmed that privacy concerns have been appropriately addressed.
A month ago, the president and CEO of the Canadian Air Transport Security Authority (CATSA), Kevin McGarr, said in an interview with Canadian Security magazine he was unsure whether full body scanners, or millimetre wave technology, would be available at Vancouver airport for the Winter Olypmics in Vancouver, indicating there were still issues to be resolved between Transport Canada and the Privacy Commissioner. In the interview, McGarr said 90 per cent of passengers going through Kelowna airport approved of using the full body scan technology as an alternative to a physical search. At the Kelowna test pilot, millimetre wave scanners from L-3 were used.
"There was good acceptance by the travelling public," McGarr said Nov. 30. "Based on that acceptance we feel it is important to make that technology available to the travelling public."
The Ministers also announced today that the Government of Canada will soon issue a request for proposal for passenger behaviour observation for passenger screening at major Canadian airports.
The request will seek a company to develop a passenger behaviour observation program and training.  Passenger behaviour observation screening consists of focusing on the passengers exhibiting suspicious behaviour, which could be an involuntary response to a fear of being discovered.
Full details on the request for proposal will be posted on MERX, the Government of Canada’s electronic tendering service www.merx.com.
Print this page