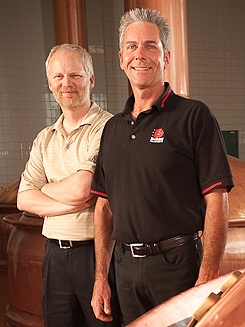 Bulldog’s client, Sleeman Breweries of Guelph, Ont., nominated the Kitchener-Waterloo-based company for the work they did on surveillance camera integration, mapping, security and access control. Bulldog also assisted them in moving towards C-TPAT certification.

Bulldog, which was founded in 2000, began its relationship with Sleeman five years ago, taking over the ULC listed fire monitoring as mandated by the Guelph Fire Department and providing service and annual inspections to their sprinkler and fire alarm systems.

Sleeman’s video surveillance system was upgraded with new cameras and DVRs and integrated with software at both plants in Guelph. They are looking at using the access control cards for their time and attendance system. A new automatic gate (Automatic Systems BLG-76) was installed at their second location in Guelph as they are applying for C-TPAT certification.

“We’ve already installed access control in their Dartmouth, N.S., plant and have plans to possibly do others,” said Joe McCann, Business Development and System Design with Bulldog Fire & Security.

Bulldog was nominated by Linden Gossen, Sleeman’s National Health and Safety manager, who indicated that on top of the integrated system that was created, he also values the level of service Bulldog brought to the organization.

“For us, the innovation was tying all of the pieces together in a simple and efficient system. This has made role allocation easier as everyone can visually see what’s going on and can respond accordingly. Customer service has been great. If we have an issue (and there will always be issues), Bulldog has responded appropriately to the concern,” said Gossen in the nomination form.

“I believe we need to choose a truly integrated system and one that has multiple technologies, not just a video system. The Sleeman project met that requirement with integration of intrusion, access control, video and fire,” Simopoulos said.

McCann acknowledged the assistance of Keyscan in putting the system together for Sleeman.

“We want to thank Sleeman for nominating us and Keyscan for helping us development the software application for the project.”

Watch for the October issue of SP&T News for a full story on the project.

Bulldog will be honoured at a dinner in October sponsored by Anixter celebrating the Security System Integrator of the Year and Security Director of the Year, to be held in Toronto.