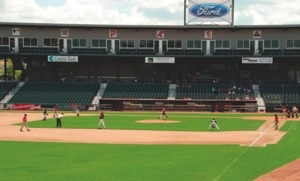 The old legacy system was badly damaged in a snowstorm when a power surge took the system offline and damaged a number of integral components, leaving the stadium vulnerable.
Stadium officials worked with fire alarm and security integrator Capitol Alarm Systems, of Penacook, N.H., to identify a surge-resistant replacement. “It’s a large investment for us and we wanted to make sure we were getting a good value for what we were paying for,” says Shaun Meredith, director of facilities at Northeast Delta Dental Stadium, the Fisher Cats’ home base. “It’s a ballpark; it’s a large facility and we needed a dependable system that would allow us to identify and take care of any issues as quickly as possible.”
Fire-Lite recently redesigned some of its control panels’ hardware components to offer improved surge protection. New colour-coded LED lights were also added for diagnostic purposes.
“Obviously, that was a big factor in our decision-making process. We wanted something that had good surge protection and was reliable,” adds Meredith. “In looking at this system, it was a good fit for what we were looking for at the ballpark.”