When the Winnipeg Police Service set out to install cameras in high-crime areas of the city, they knew they wanted a surveillance system, but didn’t give much thought to what would happen if there was ever a power outage.

With the cameras feeding off downtown hydro poles, the chance they might experience some downtime was probable. But it was the integrator they eventually selected who offered a solution to a problem they hadn’t even thought about.

IPT Integrated Solutions, an integrator of video and access control, security alarms and perimeter protection, was awarded the contract to create the IP system together, which consists of Panasonic cameras and equipment from Proxim wireless.

The project first went to public tender in Dec. 2008 and in March of last year the City of Winnipeg installed the first of its10 surveillance cameras in high crime areas of the downtown core of the Manitoba capital. 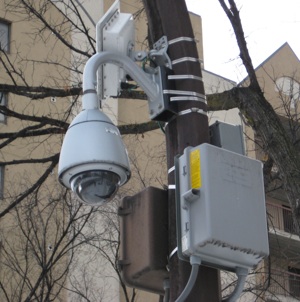 The cameras were placed in locations that have high rates of crime, vandalism and other forms of civil disorder. The locations are outside the main branch of the public library, on the perimeter of a park and in front of a shopping mall on the city’s main shopping street — and along a stretch of Main Street north of its well-known intersection with Portage Avenue.

The budget for the project was $460,000 including staff, security hardware and new office space.

Before selecting an integrator for the project, Det. Sgt. Dave Dalal, Patrol Sergeant and CCTV project coordinator with the Winnipeg Police Service says he formed a technical working group that included members of the Winnipeg Police Force IT department to provide feedback.

“Being a cop and not a technical person I wanted to have some expertise on board,” he says.

When the city went to tender, 12 companies submitted proposals to take on the project, but what made IPT Integrated Solutions stand apart was that it included back-up power as part of their specification.

“It’s something we chose to include because we thought it would give us the leg up,” says Chris Frauts, manager of integrated services for IPT. “About 98 per cent of the time it never comes up. People never think of it unless there is an issue. We typically add power backup to everything we do.”

But it was not something the police service had thought about.

“We had not included back-up power as part of our request, but it’s something we realized we wanted to have because we were drawing power off the power lines,” says Dalal.

Frauts chose a back-up power system from the Alpha Group for the City of Winnipeg project. The Alpha Micro Secure 100 is an outdoor rated uninterruptible power supply or backup power solution that supports loads up to 100W. Protected by an outdoor rated (NEMA 3R) enclosure, the Micro Secure operates in the most severe weather conditions.

The units are strapped to hydro poles along with the cameras and can withstand temperatures ranging from -40 C to 50 C and are good for up to two hours and 15 minutes in the event of an outage. In addition to having power back-up, each camera also has an SD card so when power or network issues occur they always have a recording back-up system in place.

To date, Det. Sgt. Dalal says the units have worked well and there have been about 15 incidents where the cameras have been used to help solve cases.